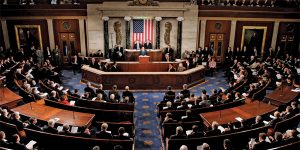 The United States Senate has just unanimously adopted a bill proposal which would eventually allow Americans affected by terrorist attacks on US soil to sue the national-states involved with such attacks.   And this has come despite vocal opposition from both the White House and from national allies like Saudi Arabia.

The proposal has been called “Justice Against Sponsors of Terrorism Act” and quickly made its way through the upper chamber of Congress, Tuesday.

Senator Charles Schumer (D-New York) admits, “This bill is very near and dear to my heart as a New Yorker because it would allow the victims of 9/11 to pursue some small measure of justice.”

Indeed, White House press secretary Josh Earnest notes, “We have to consider the significant unintended consequences of moving forward with legislation like this. It could put the U.S. at risk around the world… it is a dangerous proposition.”

A dangerous proposition to be certain; but Senator Chuck Schumer, continues, “When you lose someone to such evil…the temptation is to curse the darkness; [but] these families have lit a candle…not only to bring justice to themselves but to send a loud message to foreign governments. If you help create terrorism on American soil, you will be brought to justice.”

It is also important to note that Saudi Arabia threatened they have the ability to sell off $750 billion in American assets if they are held responsible for the acts of terrorism.  Accordingly, Saudi Arabian Foreign Minister Adel Al-Jubeir warns that a law like this could quickly reduce investor confidence.  Just this week, too, the US Department of Treasury revealed, publicly, that the kingdom of Saudi Arabia does, in fact, own $116.8 billion in Securities (as of this March).

He goes on to say, the US Congress is “stripping the principle of sovereign immunities which would turn the world for international law into the law of the jungle,” advising, too, that this is the very reason the Obama administration, as a whole, is quite opposed to it.

Finally, Speaker Paul Ryan warns that issues like this require a deeper look; and the House Judiciary committee has noted that the committee aims to hold a hearing on the Senate’s version of the bill. Ryan says, “I think we need to look at it; I think we need to review it to make sure that we’re not making mistakes with our allies and that we’re not catching people up in this that shouldn’t be caught up in this.”