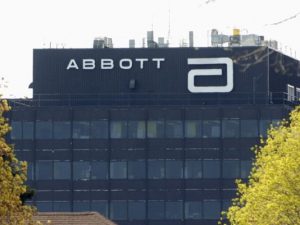 Health care giant Abbott Laboratories (NYSE:ABT) wants to get out of its deal to buy medical test developer Alere Inc. Abbott has filed a lawsuit to terminate the $5.8 billion agreement, saying Alere has lost significant value since the deal was made public in February. In a statement, Abbott said Alere has “suffered a series of damaging business developments” since the announcement of the deal. Abbott filed its complaint in the Delaware Court of Chancery.

Medicare’s elimination of billing privileges for a major Alere division, Arriva Medical, the recall of important set of products, and two criminal probes against the company caused Abbot to sour on the acquisition. Some of the red flags were already apparent at Alere before the merger agreement was signed. The statement from Abbott claims, “We have attempted to secure details and information to assess these issues for months, and Alere has blocked every attempt.”

Arriva’s sales, which stood at $88 million for the first nine months of the year, are now in jeopardy. Alere is also taking a charge of as much as $90 million in connection with the FDA-requested recall of the devices. Abbott spokesman Scott Stoffel said in an interview, “These material adverse events are a product of a lack of external controls at Alere. They constitute a strong base for terminating this transaction.”

Alere called Abbott’s lawsuit “entirely without merit” in a statement. Alere said, “Alere has fully complied with its contractual obligations under the merger agreement and is highly confident that the merger will be completed in accordance with the terms set forth in the merger agreement.” The statement also says, “Alere will take all actions necessary to protect its shareholders and to compel Abbott to complete the transaction in accordance with its terms.”

The fight between Abbott and Alere has become one of the year’s ugliest merger spats. Abbott disclosed its plan to buy Alere last winter. Shareholders of Alere voted overwhelmingly to approve the acquisition on Oct. 21. In a separate vote, they also authorized one-time payments to Alere’s top five executives totaling more than $39 million upon the completion of the buyout.

Alere previously filed a lawsuit against Abbott claiming the buyer was scheming to torpedo the merger. The suit also claimed that Abbott was pressuring the company to accept a walkaway fee of $30 million to $50 million. Abbott dismissed the Alere claims in that suit as “fiction.”