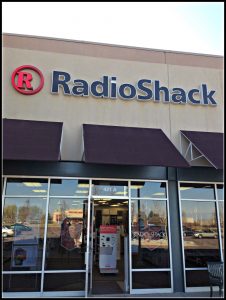 Electronics retailer RadioShack has filed for bankruptcy for the second time in two years. The company filed a Chapter 11 reorganization petition in the U.S Bankruptcy Court in Delaware on Wednesday. In its bankruptcy filing, RadioShack reported that its assets totaled between $100 million and $500 million, as did its debts, which included $62.9 million in trade debt, liens of $25.5 million and $39.7 million, and unpaid rent of $10.2 million.

RadioShack CEO and President Dene Rogers said in a statement, “For a number of reasons, most notably the surprisingly poor performance of mobility sales, especially over recent months, we have concluded that the Chapter 11 process represents the best path forward for the Company. We will continue to work with our advisors and stakeholders to preserve as many jobs as possible while maximizing value for our creditors.” The company currently employs a workforce of 5,900 employees.

The chain previously filed for bankruptcy in 2015. During that bankruptcy, the company closed about 2,400 stores. General Wireless, a joint venture of hedge fund Standard General and Sprint, acquired the chain and ran its remaining 1,700 stores. Last year, RadioShack reduced operating expenses by 23 percent while increasing gross profit by 8 percent.

The company says it will immediately close 187 more stores by March 13, roughly 12 percent of its remaining 1,500 locations. The company has not released a list of stores closing. The RadioShack stores that do not close March 13 will remain open for the time being.

General Wireless stated it is also “seeking to close and liquidate the inventory and other assets of between 530 and substantially all of their stores.” The company will continue evaluating options on those stores during the bankruptcy process.

Sprint paid General Wireless a $12 million “wind down payment” for the transfer of leases for 115 stores, as well as equipment and furniture in 245 more stores. RadioShack had focused on the Sprint brand for mobile but the partnership did not fuel the hoped-for turnaround. Kevin Crull, Sprint’s president for omnichannel sales said in a statement that the development is “not material to Sprint’s overall sales results.”

The first RadioShack store opened in Boston in 1921. The company was the eighth-largest consumer electronics dealer as recently as 2013.