Complete the form below to receive the latest headlines and analysts' recommendations for Anheuser Busch Inbev with our free daily email newsletter:

Jacobs & Co. CA increased its stake in shares of Anheuser Busch Inbev NV (NYSE:BUD) by 16.2% in the third quarter, according to the company in its most recent Form 13F filing with the SEC. The fund owned 63,886 shares of the consumer goods maker’s stock after acquiring an additional 8,893 shares during the quarter. Jacobs & Co. CA’s holdings in Anheuser Busch Inbev were worth $6,078,000 at the end of the most recent quarter.

Anheuser Busch Inbev (NYSE:BUD) last announced its earnings results on Friday, October 25th. The consumer goods maker reported $1.22 earnings per share for the quarter, missing the Thomson Reuters’ consensus estimate of $1.36 by ($0.14). Anheuser Busch Inbev had a net margin of 17.63% and a return on equity of 23.92%. The firm had revenue of $13.17 billion during the quarter, compared to analysts’ expectations of $13.78 billion. During the same period in the prior year, the company posted $0.82 EPS. The company’s revenue was down .8% compared to the same quarter last year. As a group, equities research analysts expect that Anheuser Busch Inbev NV will post 4.62 earnings per share for the current fiscal year. 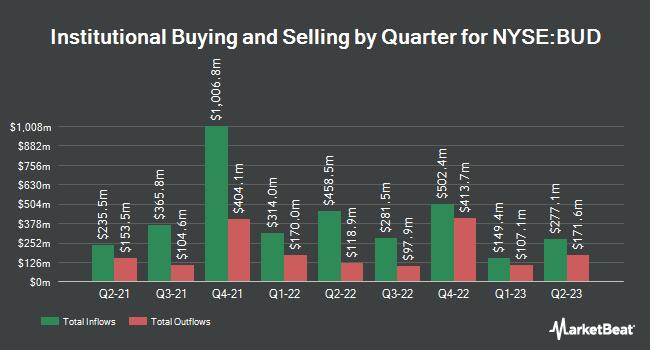 ProChain Trading Down 5.5% This Week