Complete the form below to receive the latest headlines and analysts' recommendations for Tyson Foods with our free daily email newsletter:

Tyson Foods (NYSE:TSN) had its target price lifted by BMO Capital Markets from $90.00 to $98.00 in a research note issued to investors on Wednesday morning, The Fly reports. The firm currently has an outperform rating on the stock.

Tyson Foods (NYSE:TSN) last announced its earnings results on Tuesday, November 12th. The company reported $1.21 earnings per share (EPS) for the quarter, missing the Zacks’ consensus estimate of $1.23 by ($0.02). Tyson Foods had a return on equity of 14.53% and a net margin of 4.77%. The business had revenue of $10.88 billion for the quarter, compared to analyst estimates of $10.93 billion. During the same quarter in the previous year, the company earned $1.58 EPS. The business’s revenue for the quarter was up 8.9% on a year-over-year basis. As a group, equities research analysts forecast that Tyson Foods will post 6.56 EPS for the current fiscal year.

Tyson Foods, Inc, together with its subsidiaries, operates as a food company worldwide. It operates through four segments: Beef, Pork, Chicken, and Prepared Foods. The company processes live fed cattle and live market hogs; fabricates dressed beef and pork carcasses into primal and sub-primal meat cuts, as well as case ready beef and pork, and fully-cooked meats; and raises and processes chickens into fresh, frozen, and value-added chicken products.

See Also: What is channel trading? 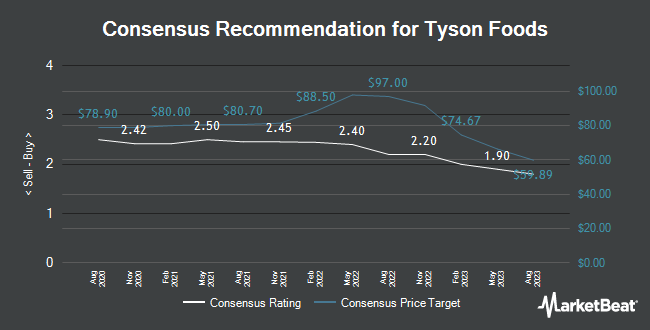