Complete the form below to receive the latest headlines and analysts' recommendations for SunCoke Energy with our free daily email newsletter:

Brokerages expect that SunCoke Energy Inc (NYSE:SXC) will report earnings per share of $0.03 for the current quarter, Zacks Investment Research reports. Two analysts have provided estimates for SunCoke Energy’s earnings, with the highest EPS estimate coming in at $0.03 and the lowest estimate coming in at $0.02. SunCoke Energy also reported earnings per share of $0.03 during the same quarter last year. The company is expected to announce its next quarterly earnings results on Tuesday, February 4th.

On average, analysts expect that SunCoke Energy will report full-year earnings of $0.34 per share for the current fiscal year. For the next fiscal year, analysts anticipate that the business will post earnings of $0.49 per share, with EPS estimates ranging from $0.41 to $0.56. Zacks Investment Research’s EPS averages are an average based on a survey of research analysts that cover SunCoke Energy.

SunCoke Energy (NYSE:SXC) last posted its quarterly earnings data on Tuesday, November 5th. The energy company reported $0.13 EPS for the quarter, beating the Zacks’ consensus estimate of $0.09 by $0.04. SunCoke Energy had a negative net margin of 9.48% and a positive return on equity of 3.89%. The company had revenue of $404.30 million for the quarter, compared to analyst estimates of $359.05 million. During the same period in the prior year, the firm posted $0.18 EPS. The company’s quarterly revenue was up 10.9% on a year-over-year basis.

In other news, Director James E. Sweetnam bought 5,300 shares of the stock in a transaction dated Tuesday, November 19th. The stock was bought at an average price of $4.98 per share, for a total transaction of $26,394.00. Corporate insiders own 1.46% of the company’s stock.

The company also recently announced an annual dividend, which will be paid on Monday, December 2nd. Stockholders of record on Tuesday, November 19th will be issued a $0.06 dividend. The ex-dividend date is Monday, November 18th. SunCoke Energy’s dividend payout ratio is currently 15.00%.

SunCoke Energy, Inc operates as an independent producer of coke in the Americas. The company operates through three segments: Domestic Coke, Brazil Coke, and Logistics. It offers metallurgical and thermal coal. The company also provides handling and/or mixing services to steel, coke, electric utility, coal producing, and other manufacturing based customers.

Featured Story: What is a Special Dividend? 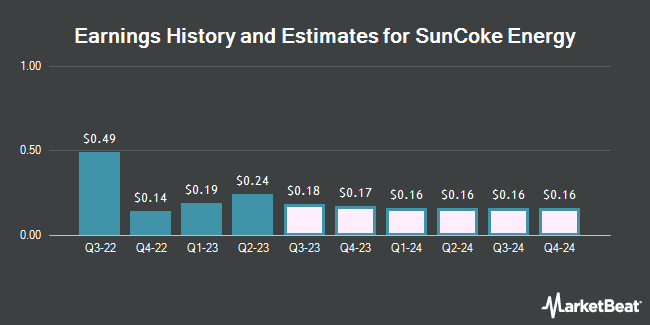