Complete the form below to receive the latest headlines and analysts' recommendations for Quest Diagnostics with our free daily email newsletter:

Quest Diagnostics Inc (NYSE:DGX) SVP Michael E. Prevoznik sold 44,556 shares of the stock in a transaction that occurred on Wednesday, November 27th. The shares were sold at an average price of $107.43, for a total transaction of $4,786,651.08. Following the sale, the senior vice president now directly owns 51,321 shares in the company, valued at $5,513,415.03. The transaction was disclosed in a filing with the Securities & Exchange Commission, which is available through this hyperlink.

The business also recently declared a quarterly dividend, which will be paid on Wednesday, January 29th. Stockholders of record on Tuesday, January 14th will be paid a $0.53 dividend. This represents a $2.12 dividend on an annualized basis and a dividend yield of 1.99%. The ex-dividend date is Monday, January 13th. Quest Diagnostics’s dividend payout ratio (DPR) is currently 33.60%.

Featured Story: What is the Bid-Ask Spread? 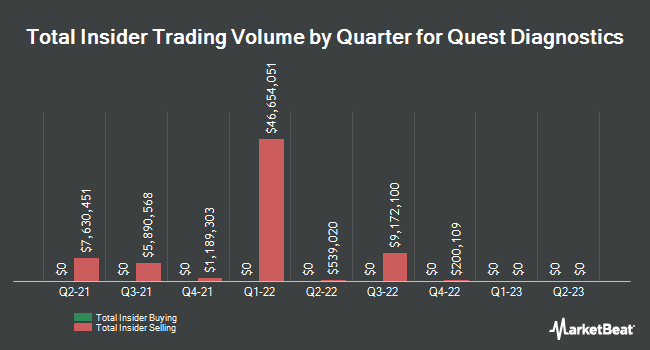