Complete the form below to receive the latest headlines and analysts' recommendations for Nabors Industries with our free daily email newsletter:

Credit Suisse Group downgraded shares of Nabors Industries (NYSE:NBR) from an outperform rating to a neutral rating in a research note published on Tuesday, BenzingaRatingsTable reports. The brokerage currently has $2.00 target price on the oil and gas company’s stock, down from their prior target price of $3.25.

Nabors Industries (NYSE:NBR) last released its quarterly earnings results on Tuesday, October 29th. The oil and gas company reported ($0.31) EPS for the quarter, missing the consensus estimate of ($0.22) by ($0.09). The business had revenue of $758.08 million during the quarter, compared to analyst estimates of $777.69 million. Nabors Industries had a negative net margin of 20.02% and a negative return on equity of 16.80%. The firm’s revenue for the quarter was down 2.7% compared to the same quarter last year. During the same quarter in the prior year, the company earned ($0.29) earnings per share. As a group, analysts forecast that Nabors Industries will post -1.34 EPS for the current fiscal year.

Featured Article: How can investors benefit from after-hours trading? 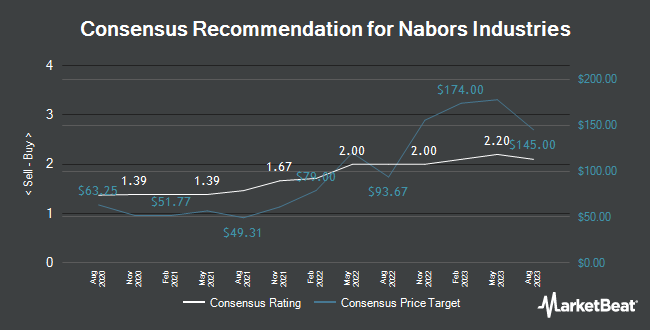 7,779 Shares in Rogers Communications Inc. Purchased by We Are One Seven LLC