Complete the form below to receive the latest headlines and analysts' recommendations for Slack with our free daily email newsletter:

Slack (NYSE:WORK) issued an update on its FY 2020
After-Hours earnings guidance on Wednesday morning. The company provided earnings per share (EPS) guidance of -0.32–0.31 for the period, compared to the Thomson Reuters consensus estimate of $-0.4. The company issued revenue guidance of $621-623 million, compared to the consensus revenue estimate of $608.98 million.Slack also updated its Q4 2020
After-Hours guidance to -0.07–0.06 EPS.

Slack (NYSE:WORK) last issued its quarterly earnings data on Wednesday, September 4th. The company reported ($0.98) earnings per share (EPS) for the quarter, beating the Thomson Reuters’ consensus estimate of ($1.03) by $0.05. The company had revenue of $144.97 million during the quarter, compared to analyst estimates of $140.60 million. As a group, research analysts expect that Slack will post -0.43 EPS for the current year.

Slack Technologies, Inc operates Slack, a business technology software platform in the United States and internationally. Its platform brings together people, applications, and data, as well as sells its offering under a software-as-a-service model. The company was formerly known as Tiny Speck, Inc and changed its name to Slack Technologies, Inc in 2014. 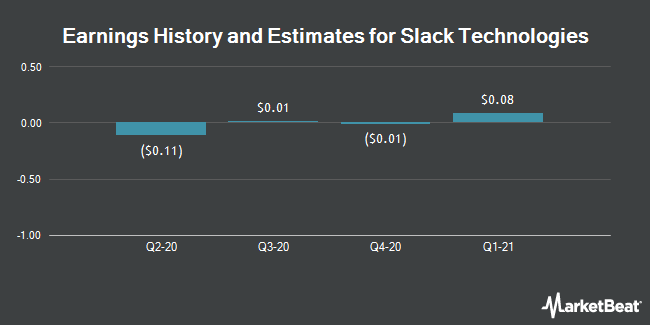 Receive News & Ratings for Slack Daily - Enter your email address below to receive a concise daily summary of the latest news and analysts' ratings for Slack and related companies with MarketBeat.com's FREE daily email newsletter.

Ryo Currency Trading Up 7.8% This Week