Complete the form below to receive the latest headlines and analysts' recommendations for Kronos Worldwide with our free daily email newsletter:

Wall Street analysts forecast that Kronos Worldwide, Inc. (NYSE:KRO) will post $378.01 million in sales for the current quarter, according to Zacks. Two analysts have provided estimates for Kronos Worldwide’s earnings, with the lowest sales estimate coming in at $364.02 million and the highest estimate coming in at $392.00 million. Kronos Worldwide reported sales of $349.40 million in the same quarter last year, which would suggest a positive year over year growth rate of 8.2%. The business is expected to report its next earnings report on Monday, March 9th.

According to Zacks, analysts expect that Kronos Worldwide will report full-year sales of $1.74 billion for the current financial year, with estimates ranging from $1.72 billion to $1.75 billion. For the next financial year, analysts expect that the business will post sales of $1.80 billion, with estimates ranging from $1.79 billion to $1.80 billion. Zacks’ sales averages are an average based on a survey of analysts that follow Kronos Worldwide.

Kronos Worldwide (NYSE:KRO) last issued its earnings results on Thursday, November 7th. The specialty chemicals company reported $0.16 earnings per share (EPS) for the quarter, missing the Thomson Reuters’ consensus estimate of $0.18 by ($0.02). The firm had revenue of $437.40 million during the quarter, compared to the consensus estimate of $427.54 million. Kronos Worldwide had a return on equity of 11.94% and a net margin of 5.95%. The company’s revenue for the quarter was up 6.6% compared to the same quarter last year. During the same period last year, the firm posted $0.28 earnings per share.

The firm also recently disclosed a quarterly dividend, which will be paid on Thursday, December 12th. Shareholders of record on Tuesday, December 3rd will be given a dividend of $0.18 per share. The ex-dividend date of this dividend is Monday, December 2nd. This represents a $0.72 annualized dividend and a yield of 5.37%. Kronos Worldwide’s dividend payout ratio (DPR) is currently 40.68%.

Kronos Worldwide, Inc produces and markets titanium dioxide pigments (TiO2) in Europe, North America, the Asia Pacific, and internationally. It produces TiO2 in two crystalline forms, rutile and anatase to impart whiteness, brightness, opacity, and durability for various products, including paints, coatings, plastics, paper, fibers, and ceramics, as well as for various specialty products, such as inks, foods, and cosmetics.

Featured Article: The Structure of a Futures Contract 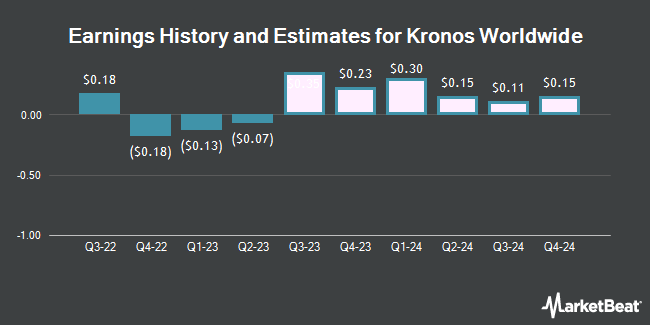