Complete the form below to receive the latest headlines and analysts' recommendations for Magnolia Oil & Gas with our free daily email newsletter:

Wall Street analysts forecast that Magnolia Oil & Gas Corp (NYSE:MGY) will report $245.27 million in sales for the current fiscal quarter, according to Zacks Investment Research. Seven analysts have issued estimates for Magnolia Oil & Gas’ earnings. The highest sales estimate is $264.00 million and the lowest is $232.00 million. Magnolia Oil & Gas reported sales of $255.06 million during the same quarter last year, which indicates a negative year-over-year growth rate of 3.8%. The firm is scheduled to report its next earnings results on Monday, February 24th.

According to Zacks, analysts expect that Magnolia Oil & Gas will report full year sales of $951.50 million for the current year, with estimates ranging from $938.00 million to $970.00 million. For the next fiscal year, analysts anticipate that the business will report sales of $1.00 billion, with estimates ranging from $883.00 million to $1.10 billion. Zacks’ sales averages are an average based on a survey of research analysts that that provide coverage for Magnolia Oil & Gas.

Magnolia Oil & Gas (NYSE:MGY) last issued its quarterly earnings results on Monday, November 4th. The company reported $0.06 earnings per share (EPS) for the quarter, missing the Thomson Reuters’ consensus estimate of $0.10 by ($0.04). Magnolia Oil & Gas had a return on equity of 2.81% and a net margin of 7.80%. The business had revenue of $244.80 million during the quarter, compared to the consensus estimate of $247.17 million.

Magnolia Oil & Gas Corporation engages in the business of acquisition, development, exploration, and production of oil, natural gas, and natural gas liquids reserves in the United States. The company has oil and natural gas properties located primarily in Karnes County and the Giddings Field in South Texas primarily comprising the Eagle Ford Shale and the Austin Chalk formation. 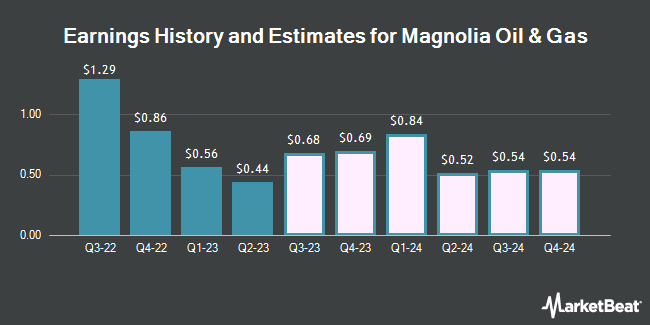 Hershey Co Expected to Announce Earnings of $1.24 Per Share