Complete the form below to receive the latest headlines and analysts' recommendations for Jagged Peak Energy with our free daily email newsletter:

On average, analysts expect that Jagged Peak Energy will report full-year earnings of $0.46 per share for the current year, with EPS estimates ranging from $0.42 to $0.49. For the next year, analysts forecast that the business will report earnings of $0.73 per share, with EPS estimates ranging from $0.60 to $0.92. Zacks Investment Research’s earnings per share calculations are a mean average based on a survey of research firms that cover Jagged Peak Energy.

Jagged Peak Energy (NYSE:JAG) last issued its quarterly earnings data on Thursday, November 7th. The mining company reported $0.10 earnings per share for the quarter, missing analysts’ consensus estimates of $0.13 by ($0.03). Jagged Peak Energy had a return on equity of 9.85% and a net margin of 29.01%. The firm had revenue of $150.07 million during the quarter, compared to analyst estimates of $151.37 million. During the same quarter last year, the company posted $0.18 EPS. The company’s revenue was down 3.4% on a year-over-year basis.

Jagged Peak Energy Inc operates as an independent oil and natural gas company. The company focuses on the acquisition and development of unconventional oil and associated liquids-rich natural gas reserves in the Southern Delaware basin, a sub-basin of the Permian basin of West Texas. As of December 31, 2018, it held an 87% average working interest in approximately 79,500 net acres with an estimated net proved reserves of 118,890 thousand barrel of oil equivalent, as well as owned a 89% average working interest in 143 net productive wells. 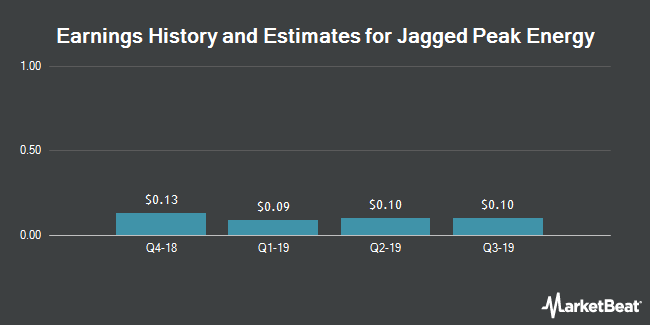