Complete the form below to receive the latest headlines and analysts' recommendations for Air Lease with our free daily email newsletter:

Air Lease Corp (NYSE:AL) EVP Grant A. Levy sold 10,000 shares of the business’s stock in a transaction on Friday, December 6th. The shares were sold at an average price of $46.45, for a total transaction of $464,500.00. Following the transaction, the executive vice president now owns 148,373 shares in the company, valued at approximately $6,891,925.85. The transaction was disclosed in a legal filing with the SEC, which can be accessed through the SEC website.

Air Lease (NYSE:AL) last released its earnings results on Thursday, November 7th. The transportation company reported $1.34 earnings per share (EPS) for the quarter, beating the Zacks’ consensus estimate of $1.29 by $0.05. Air Lease had a net margin of 29.22% and a return on equity of 10.81%. The company had revenue of $531.00 million for the quarter, compared to the consensus estimate of $525.63 million. During the same quarter in the previous year, the company earned $1.73 EPS. Air Lease’s quarterly revenue was up 17.8% compared to the same quarter last year. Sell-side analysts expect that Air Lease Corp will post 5.05 EPS for the current fiscal year.

The business also recently announced a quarterly dividend, which will be paid on Monday, January 6th. Investors of record on Friday, December 20th will be given a dividend of $0.15 per share. This represents a $0.60 dividend on an annualized basis and a dividend yield of 1.29%. The ex-dividend date is Thursday, December 19th. This is an increase from Air Lease’s previous quarterly dividend of $0.13. Air Lease’s payout ratio is presently 11.30%.

Separately, ValuEngine downgraded shares of Air Lease from a “hold” rating to a “sell” rating in a research report on Tuesday, October 29th. Two analysts have rated the stock with a sell rating and three have issued a buy rating to the company’s stock. The stock currently has an average rating of “Hold” and an average price target of $48.50.

Air Lease Corporation, an aircraft leasing company, engages in the purchase and leasing of commercial jet transport aircraft to airlines worldwide. The company also sells aircraft from its operating lease portfolio to third parties, including other leasing companies, financial services companies, and airlines. 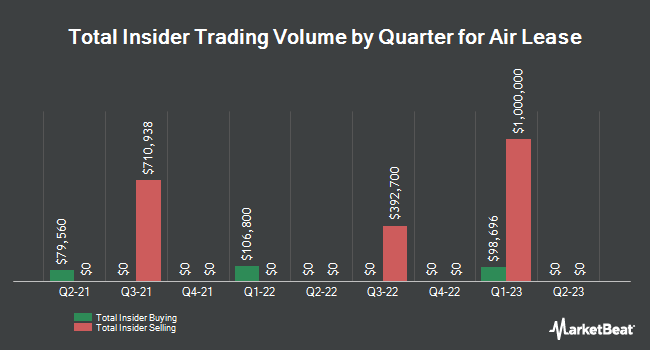