Complete the form below to receive the latest headlines and analysts' recommendations for Lamar Advertising with our free daily email newsletter:

Lamar Advertising (NASDAQ:LAMR) last announced its quarterly earnings results on Tuesday, November 5th. The real estate investment trust reported $0.98 EPS for the quarter, missing analysts’ consensus estimates of $1.06 by ($0.08). The firm had revenue of $457.80 million during the quarter, compared to analyst estimates of $452.91 million. Lamar Advertising had a net margin of 21.23% and a return on equity of 32.10%. The business’s revenue was up 9.4% compared to the same quarter last year. During the same quarter in the prior year, the business earned $0.95 EPS.

In other Lamar Advertising news, Director Stephen P. Mumblow sold 3,500 shares of the stock in a transaction on Tuesday, September 17th. The shares were sold at an average price of $79.81, for a total value of $279,335.00. Following the completion of the sale, the director now owns 5,580 shares in the company, valued at $445,339.80. The sale was disclosed in a filing with the SEC, which is accessible through this hyperlink. Company insiders own 15.19% of the company’s stock.

Founded in 1902, Lamar Advertising (Nasdaq: LAMR) is one of the largest outdoor advertising companies in North America, with approximately 360,000 displays across the United States and Canada. Lamar offers advertisers a variety of billboard, interstate logo, transit and airport advertising formats, helping both local businesses and national brands reach broad audiences every day. 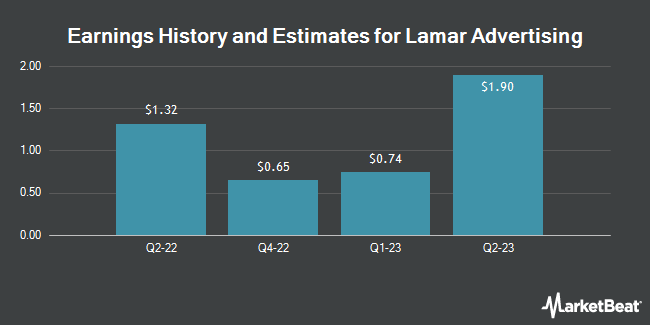 IMPINJ Upgraded by BidaskClub to Hold