Complete the form below to receive the latest headlines and analysts' recommendations for DISCO CORP/ADR with our free daily email newsletter:

DISCO CORP/ADR (OTCMKTS:DSCSY) was upgraded by Mizuho from a “neutral” rating to a “buy” rating in a research report issued on Wednesday, The Fly reports.

Separately, Zacks Investment Research upgraded shares of DISCO CORP/ADR from a “hold” rating to a “buy” rating and set a $49.00 target price for the company in a research note on Wednesday, November 20th. Three investment analysts have rated the stock with a hold rating and three have assigned a buy rating to the stock. DISCO CORP/ADR presently has a consensus rating of “Buy” and a consensus target price of $49.00.

DISCO CORP/ADR (OTCMKTS:DSCSY) last released its earnings results on Thursday, October 24th. The company reported $0.38 earnings per share for the quarter, beating the Thomson Reuters’ consensus estimate of $0.29 by $0.09. DISCO CORP/ADR had a net margin of 18.93% and a return on equity of 12.25%. The business had revenue of $327.23 million during the quarter, compared to analysts’ expectations of $328.70 million. On average, sell-side analysts predict that DISCO CORP/ADR will post 1.31 earnings per share for the current year.

See Also: What is the Consumer Price Index (CPI)? 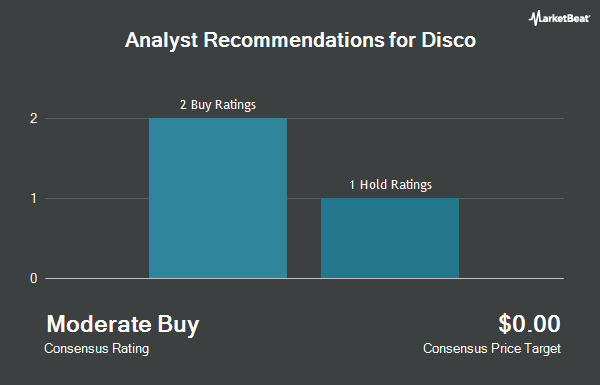