Complete the form below to receive the latest headlines and analysts' recommendations for Great Western Bancorp with our free daily email newsletter:

Brokerages expect Great Western Bancorp Inc (NYSE:GWB) to post $120.72 million in sales for the current fiscal quarter, according to Zacks Investment Research. Three analysts have made estimates for Great Western Bancorp’s earnings. The highest sales estimate is $122.00 million and the lowest is $119.76 million. Great Western Bancorp reported sales of $121.70 million during the same quarter last year, which would suggest a negative year-over-year growth rate of 0.8%. The business is scheduled to issue its next quarterly earnings report on Thursday, April 23rd.

According to Zacks, analysts expect that Great Western Bancorp will report full-year sales of $488.84 million for the current financial year, with estimates ranging from $486.06 million to $491.00 million. For the next fiscal year, analysts expect that the business will post sales of $499.03 million, with estimates ranging from $496.51 million to $500.59 million. Zacks’ sales calculations are an average based on a survey of research analysts that cover Great Western Bancorp.

Great Western Bancorp (NYSE:GWB) last posted its quarterly earnings data on Tuesday, January 28th. The bank reported $0.77 EPS for the quarter, hitting the Zacks’ consensus estimate of $0.77. The business had revenue of $120.91 million for the quarter, compared to analyst estimates of $123.05 million. During the same quarter in the prior year, the company earned $0.79 earnings per share.

In other news, CFO Peter Robert Chapman sold 4,071 shares of the company’s stock in a transaction dated Monday, January 6th. The shares were sold at an average price of $34.00, for a total value of $138,414.00. Following the sale, the chief financial officer now directly owns 25,890 shares of the company’s stock, valued at approximately $880,260. The sale was disclosed in a legal filing with the SEC, which can be accessed through the SEC website. 0.40% of the stock is currently owned by corporate insiders.

Recommended Story: What is the market perform rating? 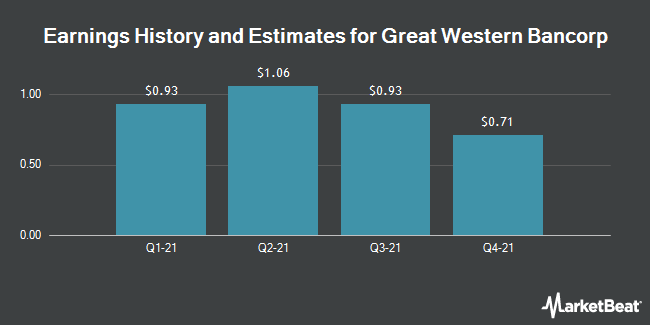