Complete the form below to receive the latest headlines and analysts' recommendations for Rogers Communications with our free daily email newsletter:

Russell Investments Group Ltd. lessened its position in Rogers Communications Inc. (NYSE:RCI) (TSE:RCI.B) by 88.5% in the 4th quarter, according to its most recent Form 13F filing with the SEC. The institutional investor owned 41,577 shares of the Wireless communications provider’s stock after selling 320,351 shares during the period. Russell Investments Group Ltd.’s holdings in Rogers Communications were worth $2,066,000 as of its most recent filing with the SEC.

The company also recently announced a quarterly dividend, which will be paid on Wednesday, April 1st. Stockholders of record on Tuesday, March 10th will be issued a $0.385 dividend. This represents a $1.54 dividend on an annualized basis and a dividend yield of 3.10%. This is a boost from Rogers Communications’s previous quarterly dividend of $0.38. The ex-dividend date of this dividend is Monday, March 9th. Rogers Communications’s dividend payout ratio is presently 48.24%.

Rogers Communications Inc operates as a communications and media company in Canada. It operates through three segments: Wireless, Cable, and Media. The Wireless segment offers wireless voice and data communication services to individual consumers, businesses, governments, and other telecommunications service providers; postpaid and prepaid wireless services under the Rogers, Fido, and chatr brands; and wireless devices, services, and applications to consumers and businesses.

Want to see what other hedge funds are holding RCI? Visit HoldingsChannel.com to get the latest 13F filings and insider trades for Rogers Communications Inc. (NYSE:RCI) (TSE:RCI.B). 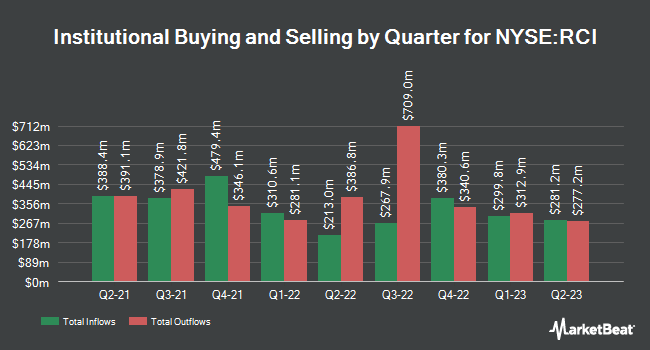