Complete the form below to receive the latest headlines and analysts' recommendations for Delta Air Lines with our free daily email newsletter:

Delta Air Lines, Inc. (NYSE:DAL) Director David S. Taylor bought 2,000 shares of the firm’s stock in a transaction that occurred on Monday, February 24th. The shares were purchased at an average cost of $53.67 per share, for a total transaction of $107,340.00. Following the completion of the transaction, the director now owns 4,960 shares of the company’s stock, valued at $266,203.20. The acquisition was disclosed in a filing with the Securities & Exchange Commission, which is available through this hyperlink.

Delta Air Lines (NYSE:DAL) last announced its quarterly earnings results on Tuesday, January 14th. The transportation company reported $1.70 EPS for the quarter, topping analysts’ consensus estimates of $1.40 by $0.30. The firm had revenue of $11.44 billion during the quarter, compared to analysts’ expectations of $11.37 billion. Delta Air Lines had a net margin of 10.14% and a return on equity of 33.32%. The company’s revenue for the quarter was up 6.5% compared to the same quarter last year. During the same quarter last year, the company earned $1.30 earnings per share. As a group, research analysts anticipate that Delta Air Lines, Inc. will post 7.34 EPS for the current fiscal year.

Delta Air Lines, Inc provides scheduled air transportation for passengers and cargo in the United States and internationally. The company operates through two segments, Airline and Refinery. Its route network is centered on a system of hubs and markets at airports in Amsterdam, Atlanta, Boston, Detroit, London-Heathrow, Los Angeles, Mexico City, Minneapolis-St. 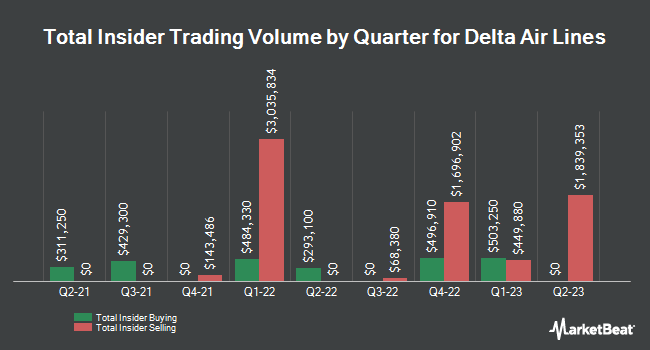