Complete the form below to receive the latest headlines and analysts' recommendations for Neogen with our free daily email newsletter:

Neogen (NASDAQ:NEOG) posted its quarterly earnings data on Tuesday. The company reported $0.30 earnings per share for the quarter, beating the Zacks’ consensus estimate of $0.28 by $0.02, MarketWatch Earnings reports. Neogen had a return on equity of 8.53% and a net margin of 14.22%. The company had revenue of $109.33 million during the quarter, compared to analyst estimates of $105.79 million. During the same quarter last year, the company earned $0.28 EPS. The firm’s revenue for the quarter was up 7.8% on a year-over-year basis.

In other news, VP Jason Warren Lilly sold 5,681 shares of the firm’s stock in a transaction on Wednesday, August 5th. The stock was sold at an average price of $80.08, for a total value of $454,934.48. Following the transaction, the vice president now directly owns 16,090 shares in the company, valued at approximately $1,288,487.20. The transaction was disclosed in a document filed with the SEC, which is accessible through this link. Company insiders own 0.90% of the company’s stock.

A number of research analysts recently weighed in on NEOG shares. Roth Capital raised their price objective on Neogen from $67.00 to $75.00 and gave the company a “neutral” rating in a research report on Thursday, July 23rd. William Blair reissued a “market perform” rating on shares of Neogen in a report on Tuesday, July 21st. BidaskClub raised Neogen from a “hold” rating to a “buy” rating in a report on Tuesday, September 15th. Finally, Stephens reissued a “buy” rating and issued a $88.00 target price on shares of Neogen in a report on Tuesday, July 14th. One research analyst has rated the stock with a sell rating, three have given a hold rating and two have given a buy rating to the company’s stock. The stock presently has a consensus rating of “Hold” and an average target price of $75.67.

Recommended Story: The components of the Stochastic Momentum Index 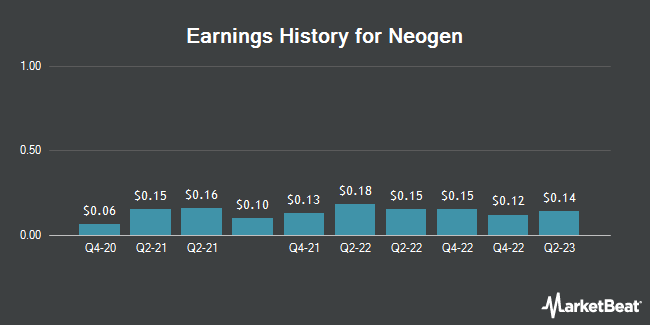 Receive News & Ratings for Neogen Daily - Enter your email address below to receive a concise daily summary of the latest news and analysts' ratings for Neogen and related companies with MarketBeat.com's FREE daily email newsletter.