Complete the form below to receive the latest headlines and analysts' recommendations for Employers with our free daily email newsletter:

Arizona State Retirement System lowered its stake in Employers Holdings, Inc. (NYSE:EIG) by 7.4% in the fourth quarter, according to its most recent Form 13F filing with the Securities and Exchange Commission. The fund owned 8,489 shares of the financial services provider’s stock after selling 676 shares during the quarter. Arizona State Retirement System’s holdings in Employers were worth $273,000 as of its most recent SEC filing.

In other news, Director James R. Kroner bought 3,200 shares of the firm’s stock in a transaction on Monday, November 30th. The stock was acquired at an average price of $30.78 per share, with a total value of $98,496.00. Following the transaction, the director now owns 3,969 shares of the company’s stock, valued at approximately $122,165.82. The acquisition was disclosed in a document filed with the SEC, which is available through this link. Corporate insiders own 2.90% of the company’s stock.

Employers (NYSE:EIG) last released its earnings results on Tuesday, February 16th. The financial services provider reported $1.46 earnings per share for the quarter, beating analysts’ consensus estimates of $0.41 by $1.05. Employers had a net margin of 11.32% and a return on equity of 5.85%. As a group, research analysts expect that Employers Holdings, Inc. will post 2.1 EPS for the current fiscal year.

The company also recently announced a quarterly dividend, which will be paid on Wednesday, March 17th. Shareholders of record on Wednesday, March 3rd will be given a dividend of $0.25 per share. This represents a $1.00 dividend on an annualized basis and a yield of 2.99%. The ex-dividend date is Tuesday, March 2nd. Employers’s dividend payout ratio is presently 31.25%.

Employers Holdings, Inc, through its subsidiaries, operates in the commercial property and casualty insurance industry primarily in the United States. It offers workers' compensation insurance to small businesses in low to medium hazard industries. The company markets its products through independent local, regional, and national agents and brokers; alternative distribution channels; and national, regional, and local trade groups and associations, as well as directly to customers.

Want to see what other hedge funds are holding EIG? Visit HoldingsChannel.com to get the latest 13F filings and insider trades for Employers Holdings, Inc. (NYSE:EIG). 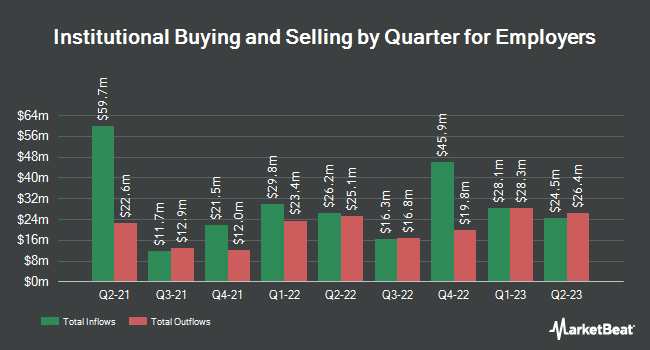 Deutsche Lufthansa Given a €5.00 Price Target by UBS Group Analysts

Siltronic Given a €150.00 Price Target by Jefferies Financial Group Analysts

ProSiebenSat.1 Media Given a €15.00 Price Target at Barclays