Complete the form below to receive the latest headlines and analysts' recommendations for Toll Brothers with our free daily email newsletter:

Toll Brothers, Inc. (NYSE:TOL) CFO Martin P. Connor sold 1,000 shares of the company’s stock in a transaction dated Tuesday, April 6th. The shares were sold at an average price of $59.92, for a total transaction of $59,920.00. Following the sale, the chief financial officer now directly owns 45,830 shares of the company’s stock, valued at $2,746,133.60. The transaction was disclosed in a filing with the Securities & Exchange Commission, which is available at this link.

Toll Brothers (NYSE:TOL) last announced its quarterly earnings data on Monday, February 22nd. The construction company reported $0.76 earnings per share (EPS) for the quarter, topping the consensus estimate of $0.47 by $0.29. The business had revenue of $1.56 billion for the quarter, compared to the consensus estimate of $1.34 billion. Toll Brothers had a net margin of 6.31% and a return on equity of 9.42%. Toll Brothers’s quarterly revenue was up 17.4% on a year-over-year basis. During the same quarter last year, the company posted $0.41 earnings per share. Equities research analysts forecast that Toll Brothers, Inc. will post 4.58 EPS for the current year.

Toll Brothers, Inc, together with its subsidiaries, designs, builds, markets, sells, and arranges finance for a range of detached and attached homes in luxury residential communities in the United States. The company operates in two segments, Traditional Home Building and Urban Infill. It also designs, builds, markets, and sells homes in urban infill markets through Toll Brothers City Living.

Further Reading: What is a Leveraged Buyout (LBO)? 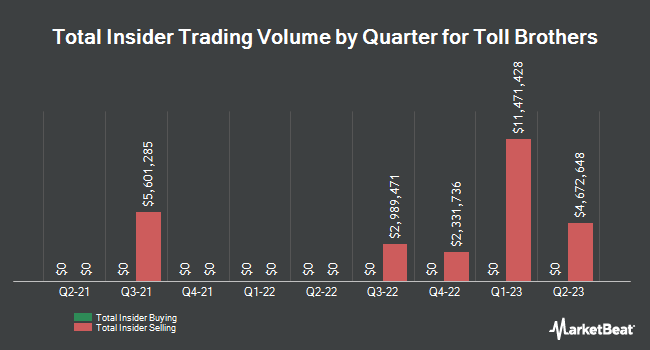