Complete the form below to receive the latest headlines and analysts' recommendations for Lincoln National with our free daily email newsletter:

Lincoln National (NYSE:LNC) is scheduled to announce its earnings results after the market closes on Wednesday, May 5th. Analysts expect the company to announce earnings of $1.62 per share for the quarter. Individual interested in registering for the company’s earnings conference call can do so using this link.

Lincoln National (NYSE:LNC) last issued its quarterly earnings results on Tuesday, February 2nd. The financial services provider reported $1.78 earnings per share for the quarter, missing the consensus estimate of $1.93 by ($0.15). Lincoln National had a net margin of 4.28% and a return on equity of 5.09%. The company had revenue of $4.66 billion for the quarter, compared to the consensus estimate of $4.61 billion. During the same quarter in the previous year, the business earned $2.41 earnings per share. Lincoln National’s revenue was up 3.1% compared to the same quarter last year. On average, analysts expect Lincoln National to post $5 EPS for the current fiscal year and $10 EPS for the next fiscal year.

The company also recently announced a quarterly dividend, which was paid on Monday, May 3rd. Stockholders of record on Monday, April 12th were paid a $0.42 dividend. The ex-dividend date of this dividend was Friday, April 9th. This represents a $1.68 annualized dividend and a dividend yield of 2.60%. Lincoln National’s dividend payout ratio is presently 19.31%.

In related news, CAO Christine A. Janofsky sold 7,413 shares of the business’s stock in a transaction that occurred on Tuesday, February 23rd. The stock was sold at an average price of $56.25, for a total transaction of $416,981.25. Following the completion of the transaction, the chief accounting officer now directly owns 14,216 shares in the company, valued at approximately $799,650. The sale was disclosed in a filing with the SEC, which is available at this hyperlink. 1.50% of the stock is owned by insiders. 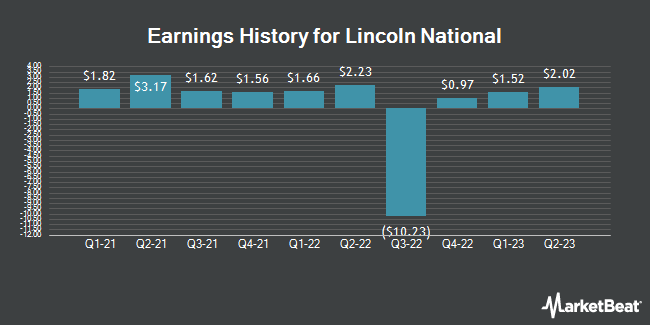 BLAST Trading Up 3.3% This Week