Zimmer Partners LP acquired a new stake in Olo Inc. (NYSE:OLO) during the 1st quarter, according to its most recent Form 13F filing with the Securities and Exchange Commission (SEC). The firm acquired 51,000 shares of the company’s stock, valued at approximately $1,346,000.

OLO (NYSE:OLO) last issued its earnings results on Tuesday, May 11th. The company reported ($0.01) EPS for the quarter, beating the Zacks’ consensus estimate of ($0.03) by $0.02. The company had revenue of $36.12 million during the quarter, compared to analyst estimates of $31.59 million. As a group, analysts anticipate that Olo Inc. will post -0.07 earnings per share for the current fiscal year.

Olo Inc provides software-as-a-service platform for multi-location restaurants in the United States. The company's platform enables on-demand commerce operations, which cover digital ordering and delivery through online and mobile ordering modules. Its modules include Ordering, an on-demand commerce solution that enables consumers to order directly from and pay restaurants via mobile, web, kiosk, voice, and other digital channels; Dispatch, a fulfillment solution, which enables restaurants to offer, manage, and expand direct delivery; and Rails, an aggregator and channel management solution, which allows restaurants to control and syndicate menu, pricing, location data, and availability.

See Also: What is a stock portfolio tracker?

Want to see what other hedge funds are holding OLO? Visit HoldingsChannel.com to get the latest 13F filings and insider trades for Olo Inc. (NYSE:OLO). 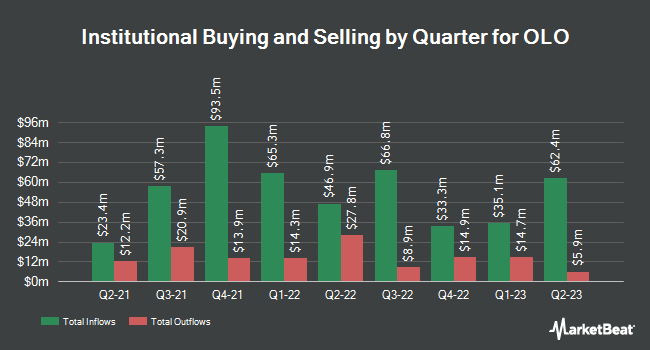 Receive News & Ratings for OLO Daily - Enter your email address below to receive a concise daily summary of the latest news and analysts' ratings for OLO and related companies with MarketBeat.com's FREE daily email newsletter.

The Blackstone Group Inc. Forecasted to Earn Q3 2021 Earnings of $0.77 Per Share

Complete the form below to receive the latest headlines and analysts' recommendations for OLO with our free daily email newsletter: