$26.65 Million in Sales Expected for TherapeuticsMD, Inc. (NASDAQ:TXMD) This Quarter

Equities research analysts expect that TherapeuticsMD, Inc. (NASDAQ:TXMD) will post sales of $26.65 million for the current quarter, according to Zacks Investment Research. Two analysts have issued estimates for TherapeuticsMD’s earnings, with the highest sales estimate coming in at $27.94 million and the lowest estimate coming in at $25.35 million. TherapeuticsMD posted sales of $19.34 million during the same quarter last year, which would indicate a positive year over year growth rate of 37.8%. The firm is scheduled to issue its next quarterly earnings report on Monday, November 8th.

On average, analysts expect that TherapeuticsMD will report full-year sales of $99.45 million for the current financial year, with estimates ranging from $97.04 million to $101.85 million. For the next financial year, analysts forecast that the business will post sales of $202.97 million, with estimates ranging from $180.73 million to $225.21 million. Zacks Investment Research’s sales calculations are a mean average based on a survey of sell-side research analysts that follow TherapeuticsMD.

TherapeuticsMD (NASDAQ:TXMD) last announced its earnings results on Wednesday, August 4th. The company reported ($0.11) earnings per share (EPS) for the quarter, hitting the consensus estimate of ($0.11). The business had revenue of $23.00 million for the quarter, compared to analyst estimates of $22.63 million.

In other TherapeuticsMD news, Director Paul Bisaro acquired 50,000 shares of the company’s stock in a transaction on Monday, August 16th. The shares were bought at an average cost of $0.79 per share, for a total transaction of $39,500.00. Following the acquisition, the director now directly owns 196,864 shares of the company’s stock, valued at $155,522.56. The transaction was disclosed in a document filed with the Securities & Exchange Commission, which can be accessed through this link. Also, CFO James Darecca sold 93,337 shares of TherapeuticsMD stock in a transaction that occurred on Thursday, August 12th. The stock was sold at an average price of $0.87, for a total value of $81,203.19. The disclosure for this sale can be found here. Insiders bought a total of 961,000 shares of company stock worth $697,070 over the last ninety days. Corporate insiders own 8.80% of the company’s stock.

TherapeuticsMD, Inc operates as a pharmaceutical company. It focuses on the development and commercialization of products for women. The firm’s technology, SYMBODA, develops advanced hormone therapy pharmaceutical products to enable delivery of bio-identical hormones through a variety of dosage forms and administration routes.

Read More: What are the FAANG Stocks? 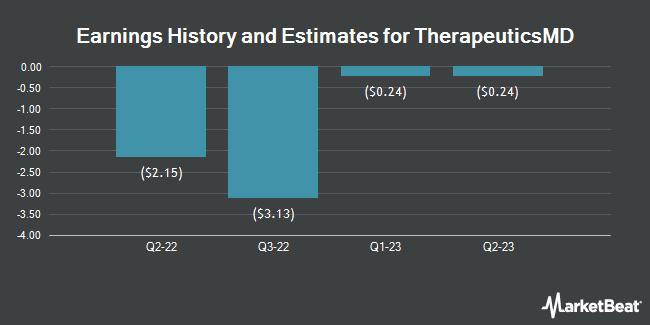 Pernod Ricard Given a €230.00 Price Target at Jefferies Financial Group

HeidelbergCement Given a €61.00 Price Target by The Goldman Sachs Group Analysts

Complete the form below to receive the latest headlines and analysts' recommendations for TherapeuticsMD with our free daily email newsletter: