NVIDIA Co. (NASDAQ:NVDA) Given Consensus Recommendation of “Buy” by Analysts

Shares of NVIDIA Co. (NASDAQ:NVDA) have earned a consensus recommendation of “Buy” from the thirty-four analysts that are currently covering the stock, Marketbeat Ratings reports. One research analyst has rated the stock with a sell rating, two have assigned a hold rating, twenty-eight have assigned a buy rating and one has issued a strong buy rating on the company. The average twelve-month target price among brokers that have issued a report on the stock in the last year is $217.88.

NVIDIA (NASDAQ:NVDA) last released its quarterly earnings results on Tuesday, August 17th. The computer hardware maker reported $1.04 EPS for the quarter, topping the Zacks’ consensus estimate of $1.02 by $0.02. The business had revenue of $6.51 billion for the quarter, compared to analyst estimates of $6.34 billion. NVIDIA had a return on equity of 40.88% and a net margin of 32.33%. NVIDIA’s revenue for the quarter was up 68.3% on a year-over-year basis. During the same period in the prior year, the company earned $0.54 EPS. On average, sell-side analysts expect that NVIDIA will post 3.57 EPS for the current fiscal year.

The business also recently disclosed a quarterly dividend, which will be paid on Thursday, September 23rd. Stockholders of record on Wednesday, September 1st will be given a dividend of $0.04 per share. The ex-dividend date of this dividend is Tuesday, August 31st. This represents a $0.16 dividend on an annualized basis and a dividend yield of 0.08%. NVIDIA’s dividend payout ratio (DPR) is presently 7.77%.

NVIDIA Corp. engages in the design and manufacture of computer graphics processors, chipsets, and related multimedia software. It operates through the following segments: Graphics Processing Unit (GPU), Tegra Processor, and All Other. The GPU segment comprises of product brands, which aims specialized markets including GeForce for gamers; Quadro for designers; Tesla and DGX for AI data scientists and big data researchers; and GRID for cloud-based visual computing users. 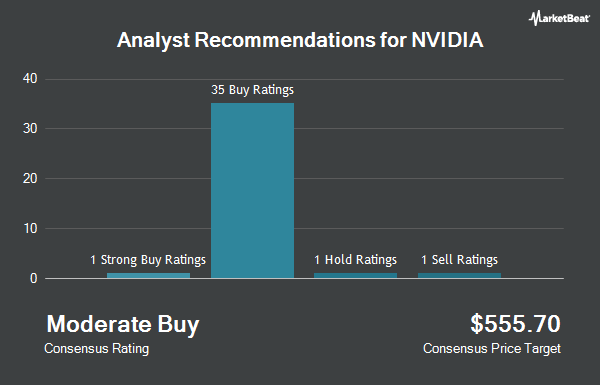 Receive News & Ratings for NVIDIA Daily - Enter your email address below to receive a concise daily summary of the latest news and analysts' ratings for NVIDIA and related companies with MarketBeat.com's FREE daily email newsletter.

Complete the form below to receive the latest headlines and analysts' recommendations for NVIDIA with our free daily email newsletter: