abrdn plc trimmed its position in GoDaddy Inc. (NYSE:GDDY) by 17.1% in the second quarter, according to its most recent Form 13F filing with the Securities and Exchange Commission. The institutional investor owned 14,598 shares of the technology company’s stock after selling 3,009 shares during the quarter. abrdn plc’s holdings in GoDaddy were worth $1,270,000 at the end of the most recent reporting period.

In other news, CEO Amanpal Singh Bhutani sold 2,980 shares of the company’s stock in a transaction that occurred on Friday, July 2nd. The shares were sold at an average price of $88.69, for a total value of $264,296.20. Following the completion of the transaction, the chief executive officer now owns 156,094 shares in the company, valued at $13,843,976.86. The transaction was disclosed in a filing with the Securities & Exchange Commission, which can be accessed through this link. 0.38% of the stock is owned by corporate insiders.

GoDaddy (NYSE:GDDY) last released its quarterly earnings results on Wednesday, August 4th. The technology company reported $0.27 earnings per share for the quarter, missing the Thomson Reuters’ consensus estimate of $0.30 by ($0.03). The company had revenue of $931.30 million during the quarter, compared to analyst estimates of $920.26 million. GoDaddy had a net margin of 5.43% and a negative return on equity of 277.41%. The firm’s quarterly revenue was up 15.5% compared to the same quarter last year. During the same quarter last year, the company earned ($4.06) EPS. As a group, equities analysts forecast that GoDaddy Inc. will post 1.09 earnings per share for the current year.

GoDaddy, Inc engages in the provision of domain name registration and web hosting services. It provides website building, hosting, and security tools. The company was founded by Robert R. Parsons on January 1997 and is headquartered in Scottsdale, AZ.

See Also: Why is cost of goods sold important?

Want to see what other hedge funds are holding GDDY? Visit HoldingsChannel.com to get the latest 13F filings and insider trades for GoDaddy Inc. (NYSE:GDDY). 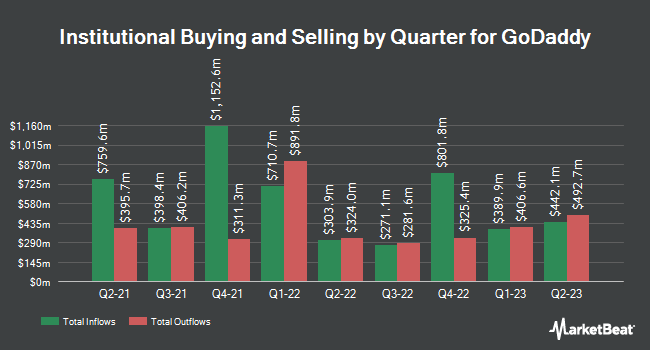 Receive News & Ratings for GoDaddy Daily - Enter your email address below to receive a concise daily summary of the latest news and analysts' ratings for GoDaddy and related companies with MarketBeat.com's FREE daily email newsletter.

Umpqua Holdings Co. Given Consensus Rating of “Hold” by Analysts

Complete the form below to receive the latest headlines and analysts' recommendations for GoDaddy with our free daily email newsletter: