Advisor Group Holdings Inc. boosted its position in BeiGene, Ltd. (NASDAQ:BGNE) by 30.9% in the second quarter, according to the company in its most recent 13F filing with the Securities & Exchange Commission. The institutional investor owned 1,169 shares of the company’s stock after purchasing an additional 276 shares during the period. Advisor Group Holdings Inc.’s holdings in BeiGene were worth $401,000 at the end of the most recent quarter.

Several research analysts recently issued reports on BGNE shares. SVB Leerink raised their target price on BeiGene from $388.00 to $417.00 and gave the stock an “outperform” rating in a research report on Monday, June 14th. Morgan Stanley cut their price objective on BeiGene from $409.00 to $407.00 and set an “overweight” rating on the stock in a research note on Monday, August 16th. Finally, Zacks Investment Research downgraded shares of BeiGene from a “hold” rating to a “sell” rating in a research report on Monday, August 16th. Three research analysts have rated the stock with a sell rating, one has issued a hold rating and six have issued a buy rating to the company. According to data from MarketBeat.com, the stock presently has a consensus rating of “Hold” and a consensus target price of $342.38.

BeiGene (NASDAQ:BGNE) last released its quarterly earnings data on Thursday, August 5th. The company reported ($5.23) earnings per share for the quarter, missing the consensus estimate of ($3.74) by ($1.49). The company had revenue of $149.99 million during the quarter, compared to the consensus estimate of $152.60 million. BeiGene had a negative net margin of 138.52% and a negative return on equity of 33.26%. Research analysts predict that BeiGene, Ltd. will post -12.21 EPS for the current fiscal year.

BeiGene Ltd. is a commercial-stage biopharmaceutical company, which engages in the development and commercialization of innovative molecularly targeted and immuno-oncology drugs for the treatment of cancer. It focuses on Zanubrutinib (BGB-3111), Tislelizumab (BGB-A317), and Pamiparib (BGB-290). The company was founded by Xiao Dong Wang and John V.

Want to see what other hedge funds are holding BGNE? Visit HoldingsChannel.com to get the latest 13F filings and insider trades for BeiGene, Ltd. (NASDAQ:BGNE). 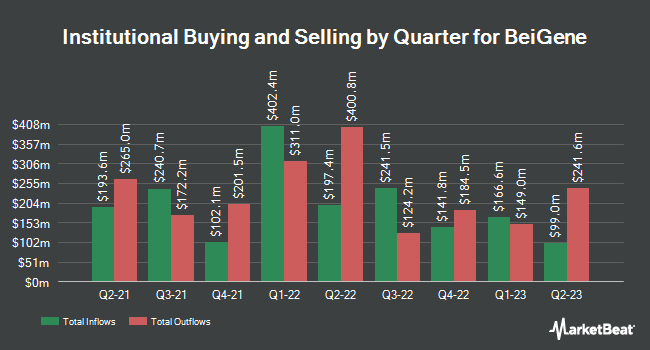 Receive News & Ratings for BeiGene Daily - Enter your email address below to receive a concise daily summary of the latest news and analysts' ratings for BeiGene and related companies with MarketBeat.com's FREE daily email newsletter.

Complete the form below to receive the latest headlines and analysts' recommendations for BeiGene with our free daily email newsletter: