Equities analysts expect Griffon Co. (NYSE:GFF) to report $686.00 million in sales for the current quarter, according to Zacks. Two analysts have issued estimates for Griffon’s earnings. The lowest sales estimate is $668.00 million and the highest is $704.00 million. Griffon reported sales of $660.67 million during the same quarter last year, which would suggest a positive year over year growth rate of 3.8%. The company is expected to report its next earnings report on Thursday, November 11th.

According to Zacks, analysts expect that Griffon will report full-year sales of $2.58 billion for the current year, with estimates ranging from $2.56 billion to $2.60 billion. For the next fiscal year, analysts forecast that the business will report sales of $2.62 billion, with estimates ranging from $2.62 billion to $2.63 billion. Zacks Investment Research’s sales averages are a mean average based on a survey of analysts that cover Griffon.

Griffon (NYSE:GFF) last issued its quarterly earnings data on Thursday, July 29th. The conglomerate reported $0.43 EPS for the quarter, topping analysts’ consensus estimates of $0.41 by $0.02. Griffon had a return on equity of 13.32% and a net margin of 3.27%. The firm had revenue of $646.79 million during the quarter, compared to analyst estimates of $616.85 million.

Separately, Zacks Investment Research upgraded Griffon from a “hold” rating to a “buy” rating and set a $28.00 target price on the stock in a research note on Monday, October 4th.

The business also recently announced a quarterly dividend, which was paid on Thursday, September 16th. Shareholders of record on Thursday, August 19th were given a dividend of $0.08 per share. The ex-dividend date of this dividend was Wednesday, August 18th. This represents a $0.32 annualized dividend and a dividend yield of 1.27%. Griffon’s dividend payout ratio is currently 19.75%.

Griffon Corp. is a diversified management and holding company, which conducts business through its subsidiaries. It provides direction and assistance to its subsidiaries in connection with acquisition and growth opportunities. The company operates through three reportable segments: Consumer and Professional Products, Home and Building Products, and Defense Electronics.

See Also: What is a Reverse Stock Split? 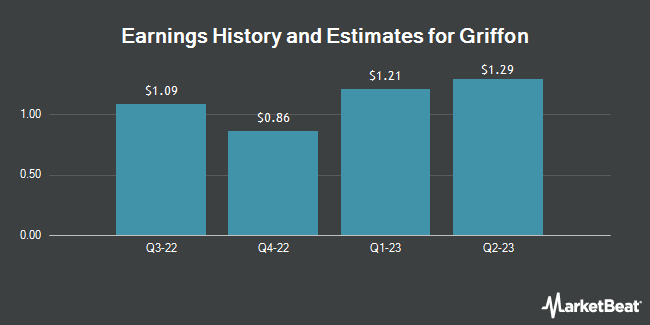 Receive News & Ratings for Griffon Daily - Enter your email address below to receive a concise daily summary of the latest news and analysts' ratings for Griffon and related companies with MarketBeat.com's FREE daily email newsletter.

Complete the form below to receive the latest headlines and analysts' recommendations for Griffon with our free daily email newsletter: