Coatue Management LLC decreased its position in Anaplan, Inc. (NYSE:PLAN) by 39.0% during the second quarter, according to its most recent disclosure with the Securities and Exchange Commission. The firm owned 3,359,810 shares of the company’s stock after selling 2,151,602 shares during the quarter. Coatue Management LLC’s holdings in Anaplan were worth $179,078,000 at the end of the most recent quarter.

Anaplan (NYSE:PLAN) last announced its quarterly earnings data on Monday, August 30th. The company reported ($0.09) earnings per share (EPS) for the quarter, topping the Zacks’ consensus estimate of ($0.14) by $0.05. The firm had revenue of $144.32 million during the quarter, compared to analysts’ expectations of $133.80 million. Anaplan had a negative net margin of 35.47% and a negative return on equity of 64.29%. The company’s revenue for the quarter was up 35.5% compared to the same quarter last year. During the same period in the prior year, the company posted ($0.04) earnings per share. Sell-side analysts anticipate that Anaplan, Inc. will post -1.33 earnings per share for the current fiscal year.

Anaplan, Inc engages in the provision of cloud-based connected planning platform that connects organizations and people for decision making. It also offers professional services, including consulting, implementation and training. The company was founded by Michael Gould, John David Guy Haddleton and Sue Haddleton in 2006 and is headquartered in San Francisco, CA.

Want to see what other hedge funds are holding PLAN? Visit HoldingsChannel.com to get the latest 13F filings and insider trades for Anaplan, Inc. (NYSE:PLAN). 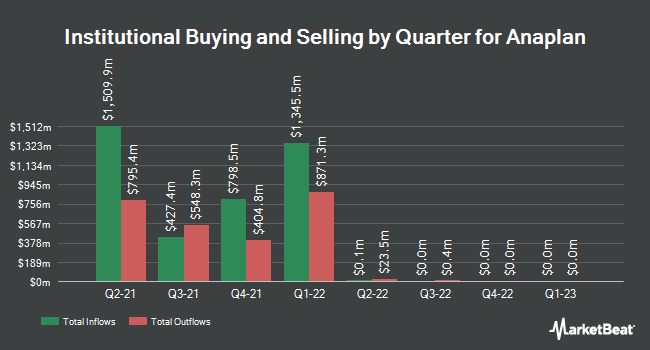 Receive News & Ratings for Anaplan Daily - Enter your email address below to receive a concise daily summary of the latest news and analysts' ratings for Anaplan and related companies with MarketBeat.com's FREE daily email newsletter.

Complete the form below to receive the latest headlines and analysts' recommendations for Anaplan with our free daily email newsletter: