RWWM Inc. lifted its stake in Wabash National Co. (NYSE:WNC) by 0.4% during the 2nd quarter, according to the company in its most recent disclosure with the Securities and Exchange Commission. The firm owned 562,948 shares of the company’s stock after buying an additional 2,483 shares during the period. Wabash National makes up approximately 1.2% of RWWM Inc.’s holdings, making the stock its 9th largest holding. RWWM Inc.’s holdings in Wabash National were worth $9,007,000 as of its most recent SEC filing.

A number of research analysts recently issued reports on the company. Zacks Investment Research upgraded Wabash National from a “sell” rating to a “hold” rating in a report on Tuesday, October 5th. Raymond James reduced their price target on Wabash National from $21.00 to $18.00 and set a “strong-buy” rating on the stock in a report on Monday, July 19th. Finally, Stephens cut their price objective on Wabash National from $17.00 to $16.00 and set an “equal weight” rating on the stock in a research report on Thursday, July 29th. Four equities research analysts have rated the stock with a hold rating, one has issued a buy rating and one has given a strong buy rating to the stock. Based on data from MarketBeat, Wabash National currently has a consensus rating of “Buy” and a consensus price target of $18.50.

Wabash National (NYSE:WNC) last released its quarterly earnings data on Wednesday, July 28th. The company reported $0.21 earnings per share (EPS) for the quarter, beating the consensus estimate of $0.11 by $0.10. The business had revenue of $449.42 million for the quarter, compared to analysts’ expectations of $470.00 million. Wabash National had a return on equity of 6.13% and a net margin of 1.56%. As a group, research analysts forecast that Wabash National Co. will post 0.72 earnings per share for the current fiscal year.

Wabash National Corp. engages in the design, manufacture and market of semi-trailers, truck bodies, specialized commercial vehicles, and liquid transportation systems. It operates through the following segments: Commercial Trailer Products, Diversified Products, and Final Mile Products. The Commercial Trailer Products segment manufactures van and platform trailers and other transportation related equipment to customers who purchase directly from the Company or through independent dealers.

Featured Article: When is a capital gain realized?

Want to see what other hedge funds are holding WNC? Visit HoldingsChannel.com to get the latest 13F filings and insider trades for Wabash National Co. (NYSE:WNC). 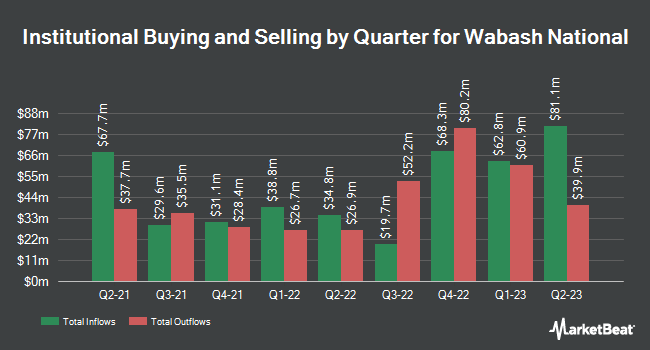 Complete the form below to receive the latest headlines and analysts' recommendations for Wabash National with our free daily email newsletter: