Geode Capital Management LLC boosted its position in SEACOR Marine Holdings Inc. (NYSE:SMHI) by 4.5% during the 2nd quarter, according to the company in its most recent disclosure with the Securities and Exchange Commission. The fund owned 158,868 shares of the company’s stock after purchasing an additional 6,802 shares during the period. Geode Capital Management LLC owned about 0.65% of SEACOR Marine worth $700,000 as of its most recent SEC filing.

SEACOR Marine (NYSE:SMHI) last released its quarterly earnings results on Thursday, November 4th. The company reported ($0.23) earnings per share for the quarter, topping the consensus estimate of ($0.67) by $0.44. SEACOR Marine had a net margin of 6.39% and a negative return on equity of 18.48%.

SEACOR Marine Holdings, Inc engages in the provision of offshore marine business. It offers global marine and support transportation services to offshore oil & gas exploration, development, and production facilities. It operates its fleet in five principal geographic regions: the United States, primarily in the Gulf of Mexico; Africa, primarily in West Africa; the Middle East and Asia; Latin America, primarily in Mexico, Brazil and Guyana; and Europe, primarily in the North Sea.

See Also: What is FinTech? 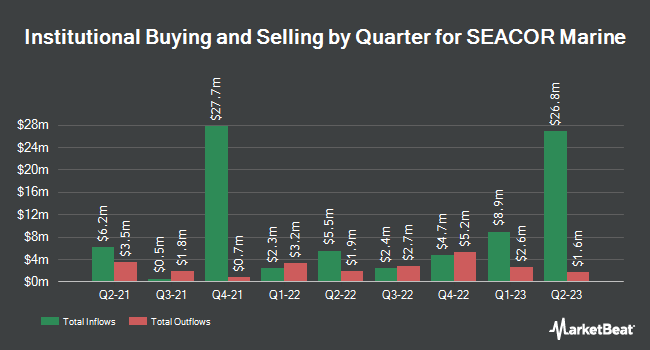 TrustVerse Price Up 17% Over Last Week

Complete the form below to receive the latest headlines and analysts' recommendations for SEACOR Marine with our free daily email newsletter: