U.S. Silica (NYSE:SLCA) last announced its quarterly earnings results on Thursday, October 28th. The mining company reported ($0.22) EPS for the quarter, topping the Thomson Reuters’ consensus estimate of ($0.23) by $0.01. U.S. Silica had a negative net margin of 0.97% and a negative return on equity of 10.79%. The company had revenue of $267.30 million for the quarter, compared to analyst estimates of $271.75 million. During the same quarter in the prior year, the business posted ($0.15) EPS. U.S. Silica’s quarterly revenue was up 51.4% on a year-over-year basis. As a group, research analysts predict that U.S. Silica Holdings, Inc. will post -0.88 earnings per share for the current fiscal year.

Separately, Morgan Stanley upped their price objective on shares of U.S. Silica from $10.00 to $11.00 and gave the company an “underweight” rating in a research note on Tuesday, August 3rd. Two analysts have rated the stock with a sell rating, three have issued a hold rating and two have assigned a buy rating to the company’s stock. According to data from MarketBeat, the company presently has an average rating of “Hold” and an average target price of $10.60.

U.S. Silica Holdings, Inc engages in the provision of commercial silica products. It operates through the following segments: Oil and Gas Proppants and Industrial and Specialty Products. The Oil and Gas Proppants segment focuses in delivering fracturing sand, which is pumped down oil and natural gas wells to prop open rock fissures and increase the flow rate of natural gas and oil from the wells.

Want to see what other hedge funds are holding SLCA? Visit HoldingsChannel.com to get the latest 13F filings and insider trades for U.S. Silica Holdings, Inc. (NYSE:SLCA). 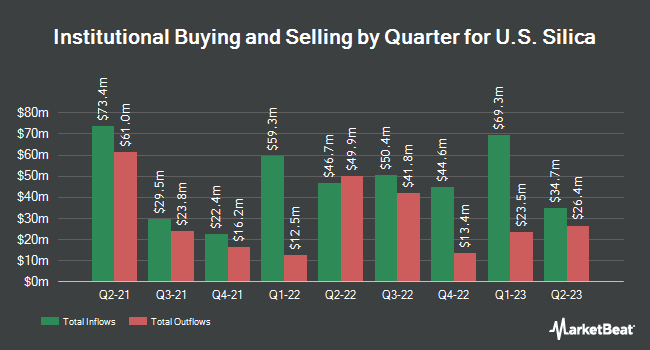 NVIDIA Co. Expected to Announce Earnings of $1.22 Per Share

Complete the form below to receive the latest headlines and analysts' recommendations for U.S. Silica with our free daily email newsletter: