According to Zacks, analysts expect that Ascendis Pharma A/S will report full year earnings of ($8.43) per share for the current year, with EPS estimates ranging from ($9.57) to ($7.30). For the next financial year, analysts forecast that the company will report earnings of ($9.35) per share, with EPS estimates ranging from ($11.10) to ($6.30). Zacks’ EPS averages are a mean average based on a survey of sell-side analysts that follow Ascendis Pharma A/S.

Ascendis Pharma A/S (NASDAQ:ASND) last released its quarterly earnings results on Tuesday, November 9th. The biotechnology company reported ($1.47) earnings per share for the quarter, beating the Zacks’ consensus estimate of ($2.60) by $1.13. Ascendis Pharma A/S had a negative return on equity of 50.72% and a negative net margin of 12,211.21%. The firm had revenue of $1.31 million during the quarter, compared to analysts’ expectations of $1.60 million. During the same period last year, the firm posted ($2.70) EPS.

Ascendis Pharma A/S is a biopharmaceutical company, which engages in the development of drug candidates. It specializes on its TransCon technologies to create prodrugs that provide for the predictable and sustained release of an unmodified parent drug. The company was founded by Jan Moller Mikkelsen, Dirk Vetter, and Harald Rau in September 2006 and is headquartered in Hellerup, Denmark.

Recommended Story: How are dividend achievers different from dividend aristocrats? 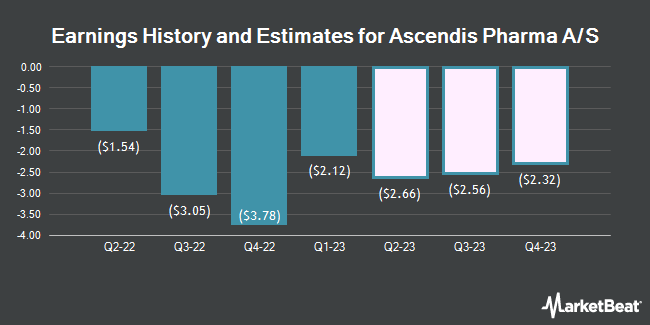 Fiserv, Inc. Given Average Recommendation of “Buy” by Analysts

Complete the form below to receive the latest headlines and analysts' recommendations for Ascendis Pharma A/S with our free daily email newsletter: