In other DaVita news, Director Pamela M. Arway sold 446 shares of DaVita stock in a transaction that occurred on Tuesday, November 23rd. The stock was sold at an average price of $102.86, for a total transaction of $45,875.56. The transaction was disclosed in a document filed with the SEC, which is available at the SEC website. Insiders own 1.00% of the company’s stock.

DaVita (NYSE:DVA) last announced its earnings results on Thursday, October 28th. The company reported $2.36 EPS for the quarter, beating analysts’ consensus estimates of $2.26 by $0.10. The company had revenue of $2.94 billion during the quarter, compared to analysts’ expectations of $2.91 billion. DaVita had a return on equity of 67.99% and a net margin of 8.33%. DaVita’s revenue for the quarter was up .5% on a year-over-year basis. During the same period last year, the business posted $1.80 EPS. On average, equities analysts forecast that DaVita Inc. will post 8.89 earnings per share for the current year.

DaVita, Inc engages in the provision of medical care services. It operates through the following two segments: US Dialysis and Related Lab Services, and Other-Ancillary Services and Strategic Initiatives. The US Dialysis and Related Lab Services segment offers kidney dialysis services in the United States for patients suffering from chronic kidney failure.

Want to see what other hedge funds are holding DVA? Visit HoldingsChannel.com to get the latest 13F filings and insider trades for DaVita Inc. (NYSE:DVA). 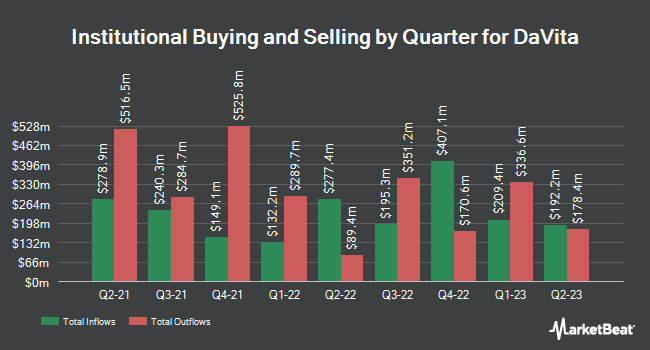 Receive News & Ratings for DaVita Daily - Enter your email address below to receive a concise daily summary of the latest news and analysts' ratings for DaVita and related companies with MarketBeat.com's FREE daily email newsletter.

Complete the form below to receive the latest headlines and analysts' recommendations for DaVita with our free daily email newsletter: