EMCORE (NASDAQ:EMKR – Get Rating) last announced its quarterly earnings data on Wednesday, May 4th. The semiconductor company reported ($0.02) EPS for the quarter, missing analysts’ consensus estimates of $0.03 by ($0.05). EMCORE had a return on equity of 10.92% and a net margin of 11.69%. During the same period last year, the business earned $0.15 earnings per share. Equities analysts anticipate that EMCORE Co. will post -0.23 EPS for the current year.

A number of research firms recently issued reports on EMKR. StockNews.com began coverage on EMCORE in a report on Thursday, March 31st. They issued a “hold” rating for the company. Zacks Investment Research cut EMCORE from a “hold” rating to a “sell” rating in a report on Tuesday. Finally, Lake Street Capital cut EMCORE from a “buy” rating to a “hold” rating and cut their price target for the company from $11.00 to $4.50 in a report on Thursday, February 10th. One investment analyst has rated the stock with a sell rating, two have assigned a hold rating and one has issued a buy rating to the company’s stock. According to MarketBeat.com, EMCORE has a consensus rating of “Hold” and an average price target of $9.58.

Want to see what other hedge funds are holding EMKR? Visit HoldingsChannel.com to get the latest 13F filings and insider trades for EMCORE Co. (NASDAQ:EMKR – Get Rating). 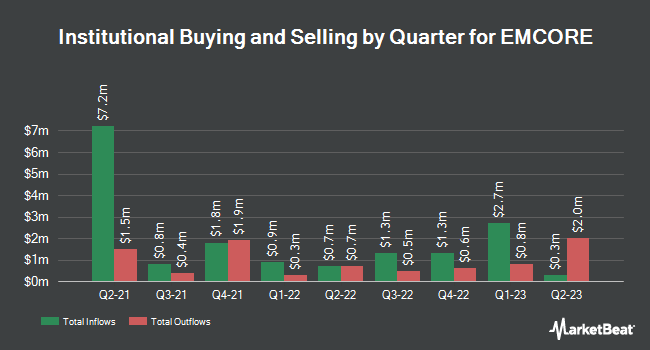 Receive News & Ratings for EMCORE Daily - Enter your email address below to receive a concise daily summary of the latest news and analysts' ratings for EMCORE and related companies with MarketBeat.com's FREE daily email newsletter.

Decentr Price Down 7.7% Over Last Week

Complete the form below to receive the latest headlines and analysts' recommendations for EMCORE with our free daily email newsletter: