PFS Investments Inc. increased its holdings in shares of Hawaiian Holdings, Inc. (NASDAQ:HA – Get Rating) by 21.0% during the fourth quarter, according to its most recent 13F filing with the Securities and Exchange Commission. The fund owned 40,986 shares of the transportation company’s stock after acquiring an additional 7,111 shares during the quarter. PFS Investments Inc. owned about 0.08% of Hawaiian worth $753,000 as of its most recent SEC filing.

A number of other institutional investors have also made changes to their positions in the business. Quadrant Capital Group LLC lifted its position in Hawaiian by 93.9% during the fourth quarter. Quadrant Capital Group LLC now owns 1,462 shares of the transportation company’s stock worth $27,000 after acquiring an additional 708 shares during the last quarter. Barrow Hanley Mewhinney & Strauss LLC bought a new stake in Hawaiian in the 4th quarter valued at $30,000. Amundi Pioneer Asset Management Inc. acquired a new position in Hawaiian in the 1st quarter valued at $81,000. Royal Bank of Canada grew its holdings in Hawaiian by 11.7% in the 3rd quarter. Royal Bank of Canada now owns 8,655 shares of the transportation company’s stock valued at $187,000 after buying an additional 906 shares in the last quarter. Finally, Point72 Asset Management L.P. bought a new position in Hawaiian during the 3rd quarter worth $243,000. 88.28% of the stock is owned by institutional investors and hedge funds.

A number of equities research analysts have recently weighed in on the stock. The Goldman Sachs Group dropped their price target on shares of Hawaiian from $10.00 to $9.00 and set a “sell” rating for the company in a research report on Thursday, April 7th. Deutsche Bank Aktiengesellschaft cut Hawaiian from a “buy” rating to a “hold” rating and dropped their price objective for the company from $25.00 to $23.00 in a report on Friday, April 22nd. Finally, StockNews.com raised Hawaiian from a “sell” rating to a “hold” rating in a report on Saturday, May 7th. One investment analyst has rated the stock with a sell rating and six have given a hold rating to the company’s stock. According to MarketBeat, the company currently has an average rating of “Hold” and an average price target of $20.40.

Hawaiian (NASDAQ:HA – Get Rating) last announced its earnings results on Tuesday, April 26th. The transportation company reported ($2.54) earnings per share (EPS) for the quarter, missing the consensus estimate of ($2.51) by ($0.03). Hawaiian had a negative return on equity of 57.98% and a negative net margin of 10.94%. The company had revenue of $477.21 million for the quarter, compared to the consensus estimate of $476.68 million. During the same period in the prior year, the business earned ($3.85) earnings per share. The firm’s revenue for the quarter was up 161.9% on a year-over-year basis. As a group, equities research analysts predict that Hawaiian Holdings, Inc. will post -3.94 EPS for the current year.

In other Hawaiian news, VP Aaron J. Alter sold 2,500 shares of the stock in a transaction dated Monday, February 28th. The stock was sold at an average price of $19.39, for a total transaction of $48,475.00. The sale was disclosed in a filing with the Securities & Exchange Commission, which can be accessed through this hyperlink. 2.20% of the stock is owned by insiders. 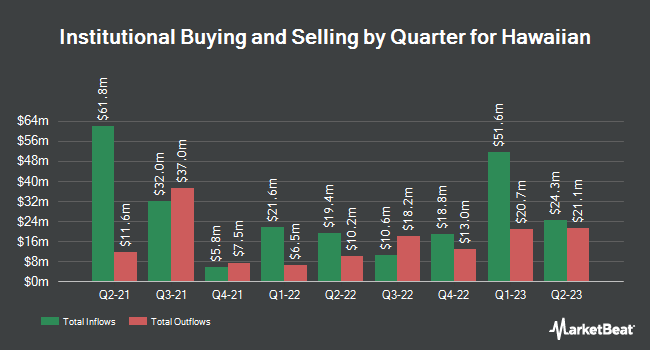 Receive News & Ratings for Hawaiian Daily - Enter your email address below to receive a concise daily summary of the latest news and analysts' ratings for Hawaiian and related companies with MarketBeat.com's FREE daily email newsletter.

Snap One Stock Price Down 8.3%

Complete the form below to receive the latest headlines and analysts' recommendations for Hawaiian with our free daily email newsletter: