Williams Jones Wealth Management LLC. reduced its stake in shares of Ralph Lauren Co. (NYSE:RL – Get Rating) by 9.4% during the fourth quarter, according to the company in its most recent disclosure with the Securities & Exchange Commission. The institutional investor owned 7,748 shares of the textile maker’s stock after selling 800 shares during the quarter. Williams Jones Wealth Management LLC.’s holdings in Ralph Lauren were worth $921,000 at the end of the most recent reporting period.

Ralph Lauren (NYSE:RL – Get Rating) last issued its earnings results on Tuesday, May 24th. The textile maker reported $0.49 EPS for the quarter, beating analysts’ consensus estimates of $0.38 by $0.11. The business had revenue of $1.53 billion during the quarter, compared to analyst estimates of $1.46 billion. Ralph Lauren had a return on equity of 22.59% and a net margin of 8.38%. Ralph Lauren’s revenue was up 18.7% on a year-over-year basis. During the same period in the prior year, the company posted $0.38 earnings per share. As a group, equities analysts predict that Ralph Lauren Co. will post 8.16 EPS for the current fiscal year.

Ralph Lauren declared that its Board of Directors has approved a share repurchase plan on Thursday, February 3rd that permits the company to repurchase $1.50 billion in shares. This repurchase authorization permits the textile maker to purchase up to 17.3% of its stock through open market purchases. Stock repurchase plans are usually a sign that the company’s management believes its stock is undervalued.

The company also recently announced a quarterly dividend, which will be paid on Friday, July 15th. Investors of record on Friday, July 1st will be paid a $0.75 dividend. This represents a $3.00 dividend on an annualized basis and a dividend yield of 3.29%. This is a positive change from Ralph Lauren’s previous quarterly dividend of $0.69. Ralph Lauren’s dividend payout ratio is presently 41.23%.

About Ralph Lauren (Get Rating) 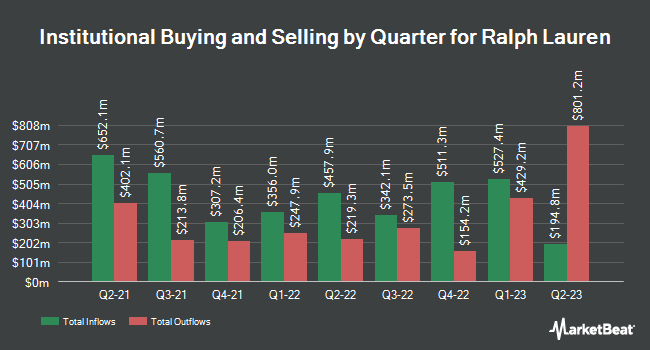 Complete the form below to receive the latest headlines and analysts' recommendations for Ralph Lauren with our free daily email newsletter: