Novo Nordisk A/S (NYSE:NVO – Get Rating) announced a semi-annual dividend on Friday, August 5th, Wall Street Journal reports. Investors of record on Monday, August 15th will be given a dividend of 0.5836 per share on Tuesday, August 23rd. This represents a dividend yield of 1.1%. The ex-dividend date of this dividend is Friday, August 12th.

Novo Nordisk A/S, a healthcare company, engages in the research, development, manufacture, and marketing of pharmaceutical products worldwide. It operates in two segments, Diabetes and Obesity care, and Biopharm. The Diabetes and Obesity care segment provides products in the areas of insulins, GLP-1 and related delivery systems, oral antidiabetic products, obesity, and other chronic diseases. 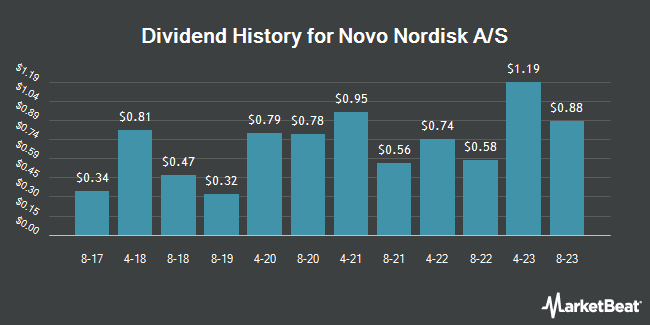 Complete the form below to receive the latest headlines and analysts' recommendations for Novo Nordisk A/S with our free daily email newsletter: