Revolve Group (NYSE:RVLV – Get Rating) was downgraded by research analysts at Wedbush from an “outperform” rating to a “neutral” rating in a note issued to investors on Thursday, Marketbeat Ratings reports. They currently have a $23.00 target price on the stock, down from their prior target price of $59.00. Wedbush’s price target would indicate a potential downside of 15.90% from the company’s previous close.

Revolve Group (NYSE:RVLV – Get Rating) last announced its earnings results on Tuesday, May 3rd. The company reported $0.30 earnings per share (EPS) for the quarter, beating the consensus estimate of $0.25 by $0.05. Revolve Group had a net margin of 8.03% and a return on equity of 27.07%. The company had revenue of $283.50 million for the quarter, compared to the consensus estimate of $256.78 million. During the same period in the previous year, the business earned $0.30 EPS. The company’s revenue was up 58.5% on a year-over-year basis. Equities analysts expect that Revolve Group will post 1.22 earnings per share for the current fiscal year.

Revolve Group, Inc operates as an online fashion retailer for consumers in the United States and internationally. The company operates in two segments, REVOLVE and FWRD. It operates a platform that connects consumers and global fashion influencers, as well as emerging, established, and owned brands. The company offers women's apparel, footwear, accessories, and beauty styles under established and emerging brands, as well as owned brands. 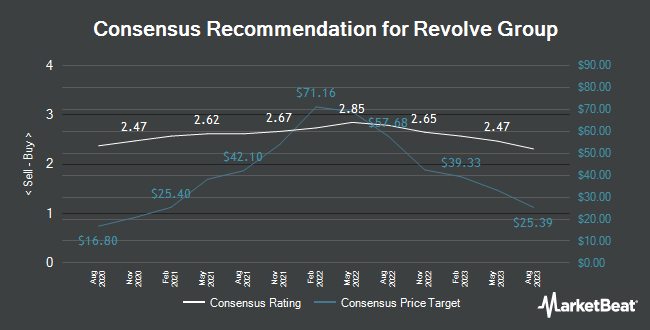 Salzgitter Given a €25.00 Price Target at UBS Group

Complete the form below to receive the latest headlines and analysts' recommendations for Revolve Group with our free daily email newsletter: