Photronics (NASDAQ:PLAB – Get Rating) last released its quarterly earnings data on Tuesday, August 30th. The semiconductor company reported $0.51 EPS for the quarter, beating analysts’ consensus estimates of $0.50 by $0.01. Photronics had a return on equity of 9.97% and a net margin of 13.07%. The firm had revenue of $219.90 million for the quarter, compared to analysts’ expectations of $210.00 million. During the same period in the prior year, the firm posted $0.22 earnings per share. The firm’s quarterly revenue was up 28.9% on a year-over-year basis. As a group, equities research analysts predict that Photronics will post 1.84 earnings per share for the current fiscal year.

Hedge Funds Weigh In On Photronics

Photronics, Inc, together with its subsidiaries, engages in the manufacture and sale of photomask products and services in the United States, Taiwan, Korea, Europe, China, and internationally. The company offers photomasks that are used in the manufacture of integrated circuits and flat panel displays (FPDs); and to transfer circuit patterns onto semiconductor wafers, FDP substrates, and other types of electrical and optical components. 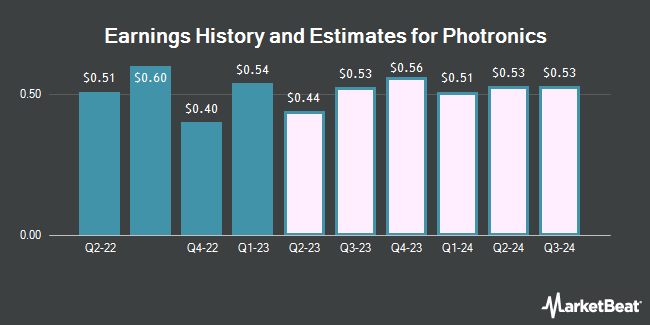 Complete the form below to receive the latest headlines and analysts' recommendations for Photronics with our free daily email newsletter: