TRADEMARK VIOLATION NOTICE: “Oppenheimer Holdings Brokers Lift Earnings Estimates for Kansas City Southern (KSU)” was originally posted by Community Financial News and is owned by of Community Financial News. If you are viewing this article on another publication, it was illegally stolen and republished in violation of United States and international copyright and trademark legislation. The correct version of this article can be read at https://www.com-unik.info/2017/04/13/oppenheimer-holdings-brokers-lift-earnings-estimates-for-kansas-city-southern-ksu.html. 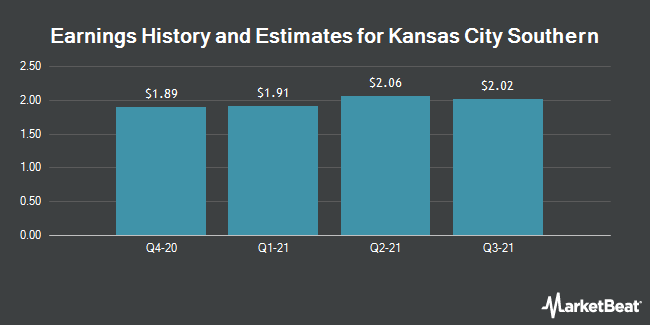 The company also recently declared a quarterly dividend, which was paid on Wednesday, April 5th. Stockholders of record on Monday, March 13th were paid a $0.33 dividend. The ex-dividend date of this dividend was Thursday, March 9th. This represents a $1.32 annualized dividend and a dividend yield of 1.51%. Kansas City Southern’s dividend payout ratio (DPR) is 29.80%.

In other news, insider Delano Jose Guillermo Zozaya sold 1,000 shares of the stock in a transaction that occurred on Tuesday, January 31st. The shares were sold at an average price of $85.41, for a total value of $85,410.00. Following the completion of the sale, the insider now owns 46,852 shares of the company’s stock, valued at approximately $4,001,629.32. The transaction was disclosed in a filing with the SEC, which is accessible through this link. Corporate insiders own 0.86% of the company’s stock.