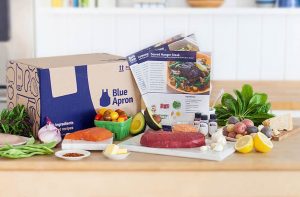 Meal-delivery service Blue Apron has official filed to go public. The company plans to list its shares on the New York Stock Exchange under the ticker symbol APRN. Blue Apron was founded in 2012 and is known for sending recipes, along with pre-packaged and pre-measured meal ingredients, directly to customers. Goldman Sachs is leading the initial public offering.

The IPO filing offered a detailed look at the company’s financials for the first time. The rate of growth the company has experienced in recent years is impressive. Blue Apron’s revenues have been growing quickly, rising from $340 million in 2015 to $795 million in 2016.

However, the company’s financials show that its losses have grown year-over year, rising from $47 million in 2015 to $54.9 million in 2016. The company said in its S1 filing, “We have a history of losses, and we may be unable to achieve or sustain profitability.” Blue Apron was valued at $2 billion in its last venture round. The company has raised nearly $194 million in funding to date.

Roughly 1 million customers paid for Blue Apron orders in the first quarter this year, up from 649,000 customers in the same period last year. About a third of those customers are highly coveted millennials 25 to 34 years old. About a quarter more are between 35 and 44.

However, average order sizes fell from $59.28 in the March quarter of 2016 to $57.23 in the same quarter of 2017. The average number of orders per customer per quarter dropped to 4.1 in the period from 4.5 in the first quarter last year. Blue Apron has, to date, delivered 159 million meals across the U.S.

Blue Apron was long seen as the most likely candidate to file to go public this year. The company had put plans to file for an IPO on hold last year because of concerns about how much it costs the company to acquire customers. The company spends a considerable amount on marketing. It spent $144.1 million, or roughly 18 percent of its revenue, on marketing during 2016.

It is unclear how much Blue Apron expects to raise in the IPO. The company has not announced pricing for its shares or how many shares it will sell. CEO Matthew Salzberg currently owns 47.4 million shares, or 31 percent of the company. Bessemer Venture Partners is the second largest shareholder with 36 million shares, giving it a 23.8 percent stake. First Round Capital is third, owning about 11 percent of the company.