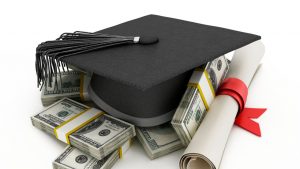 A report recently released by the Government Accountability Office projects the full cost of income-based repayment plans for student loan debt for the first time. According to the report, the federal government will forgive at least $108 billion in student debt in coming years. Most of the money will be forgiven due to borrowers fulfilling their obligations under income-based repayment plans. The rest will be written off due to disability or death.

Income-based repayment plans tie borrowers’ payments to their earnings. The most generous plan caps a borrower’s monthly payment at 10 percent of discretionary income. Any remaining balance is then forgiven after 10 or 20 years. The plans are only available to students who borrowed directly from the government.

Income-based repayment plans are the Obama administration’s main strategy for helping student-loan borrowers avoid default. In recent years, the government has seen a sharp increase in enrollment in income-driven repayment plans. In the past three years, enrollment in the plans has more than tripled, reaching 5.3 million borrowers as of June. Those borrowers collectively owe $355 billion.

The overall government student loan portfolio currently totals $1.26 trillion of debt outstanding. The projected revenues from these loans will fall as more people opt for income-based repayment plans. The overall cost of the plans could also grow as college enrollment increases. The GAO said it could take 40 years to know full costs of the programs. The figure does not include write-offs for students who prove their colleges lured them to enroll by deceptive practices.

Borrowers who are unemployed or earning little often find it impossible to make the required payments on their student loans. Government data shows that roughly 8 million borrowers are currently in default on their loans. Many of those owe less than $10,000. However, the average balance of borrowers in income-driven repayment plans is nearly $67,000. Most of the borrowers with high debt balances have attended graduate school.

The report shows the Education Department’s accounting methods have understated the costs of its various debt-relief plans by tens of billions of dollars. Budget estimates for the loan program failed to account for inflation when estimating borrowers’ future earnings. The agency also failed to account for further increases in enrollment in income-driven repayment plans. In November, the Education Department reduced the projected revenue from all loans issued before the 2015 fiscal year by $23.35 billion over higher-than-expected default rates and increased enrollment in income-based repayment plans.