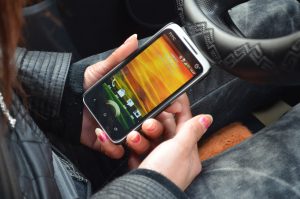 The National Highway Traffic Safety Administration (NHTSA) has turned its focus to reducing driver distraction from portable devices and other gear designed to be connected to your car. The agency has now published its first safety guidelines regarding those devices. U.S. Transportation Secretary Anthony Foxx said, “These commonsense guidelines, grounded in the best research available, will help designers of mobile devices build products that cut down on distraction on the road.”

Apps and smartphones have been linked to a surge in deaths due to distracted driving. Highway deaths due to distractions reached at least 3,500 last year. Back in 2013, the NHTSA proposed limiting the amount of interactions needed to complete an action on in-car infotainment systems in the first phase of its proposals. The new guidelines, which are part of a Phase 2, aims to limit how you use your phone while you’re behind the wheel.

At the core of the guidelines is a concept dubbed “Driver Mode” by the NHTSA. Under Driver Mode, your phone would allow a customized subset of apps and functions to run while preventing certain distracting features from working. The feature would only work when a smartphone or other device is paired with the car.

The NHTSA’s preferred method of enforcing Driver Mode would be through automatic activation, according to the proposal. Once it’s clear that the car is in motion and going a certain speed, your phone would enter Driver Mode without any input from you. Right now, the concept is just part of the guidelines which are voluntary. Even if car makers chose to add Driving Mode to their cars, users could just opt to not connect their phones to the car.

It is already clear that this type of system for smartphones is possible. The popular Pokemon GO smartphone app recently updated its platform so its tracking feature and ability to collect items are disabled once the vehicle the user is in reaches a certain speed. The change was meant to prevent users from playing the game while driving. However, the developer of the game experienced a backlash from those who were passengers in vehicles because their devices were also affected.

The proposal drew immediate opposition from the electronics industry. Wireless company trade group CTIA, said the proposal was “the wrong approach for consumers.” The Consumer Technology Association trade group said that the guidelines were “extreme.” Gary Shapiro, president of the Consumer Technology Association, said, “NHTSA doesn’t have the authority to dictate the design of smartphone apps and other devices used in cars — its legal jurisdiction begins and ends with motor vehicle equipment.”

-$0.17 Earnings Per Share Expected for S&W Seed This Quarter