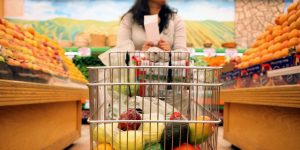 Amazon (NASDAQ:AMZN) has announced the launch of a futuristic new grocery store concept dubbed Amazon Go. The concept aims to take some of the hassles out of grocery shopping by removing two of the greatest obstacles to customer satisfaction: lines and checking out with purchases. Amazon says that Amazon Go is a “new kind of store with no checkout required.”

Amazon Go is launching in beta to Amazon employees at a 1,800 square foot location in Seattle located on the corner of Seventh Avenue and Blanchard Street. The store is currently open to Amazon employees only. The store will be open to all Amazon customers at some point early next year. A public opening is scheduled for early 2017.

Amazon says on the official Go site that the goal was to create a store where customers could simply take what they want and go. The new concept uses “Just Walk Out” technology, which uses a gaggle of technologies similar to those used in self-driving cars to track what is put into and removed from the customer’s cart. The company says that the store has been in the works for four years.

The shopper starts by scanning an app as they enter the Amazon Go shop. Just like a regular grocery store, they can roam around the store selecting the items that they want. Sensors and computer vision keeps track of what’s taken off and returned to the shelves. When the shopper is done, they simply walk out of the store with their purchases and the company charges their Amazon account, providing them with a digital receipt.

The retail location is built around ready-to-eat meals, Amazon Meal Kits with 30 minute meal prep, and snacks prepared on-site. Amazon says there will be well-known brands as well as “special finds” stocked in the store. Amazon Go does away with human cashiers, leading to concerns that widespread adoption of the concept would eliminate some jobs. According to a report from the Bureau of Labor Statistics released this year, cashiers are the second-largest occupation in the U.S., with 3.5 million people employed in the profession.

This is not Amazon’s first foray into the grocery marketplace. Customers have long been able to order groceries and home supplies from Amazon’s Prime Pantry service. The company’s AmazonFresh grocery delivery service has gradually rolled out in various US markets. In the future, it is believed that Amazon Go will be a strong competitor for digital grocery services Selfycart and Instacart.