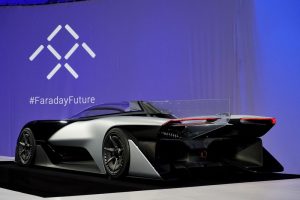 Silicon Valley startup Faraday Future has canceled its plans to build a $1 billion factory in Nevada. Stefan Krause, Faraday’s chief financial officer, announced in a statement, “We have decided to put a hold on our factory at the Apex site in North Las Vegas.” It is said that the plan was canceled due to cash problems.

According to the Nevada Governor’s Office of Economic Development, the state’s agreement with Faraday required the company to fully invest a minimum of $1 billion to receive incentives. Unfortunately, the company is said to be in dire financial straits with mounting debts, unpaid bills, and financial mismanagement. The government was aware of the risks of entering into an agreement with a start-up. The governor’s office said, “The agreement with Faraday held Nevada’s citizens harmless from the risk associated with this project.”

Faraday announced it was restarting construction of a production facility in North Las Vegas five months ago. That announcement came nearly one year after the company initially halted construction because of financial woes. It now appears that the factory will never be built.

The US start-up held a ceremony when construction of the facility began in April last year. That next October, the company halted construction amid reports of money issues. The facility’s building contractor claimed payments had stopped and at least two other suppliers took legal action to force Faraday to pay its debts.

In January, Faraday’s CEO said that the company’s first electric vehicle, the FF 91, would be a luxury car built at the Nevada factory. The company claimed the FF 91 would be the world’s fastest electric car. Then, a Chinese court froze billions of dollars in assets controlled by LeEco’s Jia Yueting, a major investor in the company, leaving Faraday without the means to continue construction on the Nevada factory.

Jia is one of China’s most outspoken and controversial entrepreneurs. He made a fortune building Leshi Internet Information & Technology Corp. into China’s version of Netflix. Jia has stepped down from the chief executive officer role at Leshi and said he would resign from its board to focus on serving as chairman of LeEco’s auto unit and Faraday Future. Jia is a backer of Faraday, but LeEco doesn’t own any shares in the carmaker.

Faraday Future said in the statement that it would keep all rights to the site in North Las Vegas and still planned to build a vehicle production facility there. Faraday said in its statement, “We are in the process of identifying a manufacturing facility that presents a faster path to start-of-production and aligns with future strategic options.”