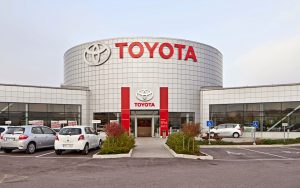 Toyota (NYSE:TM) said Tuesday that it is stepping up its investments in technology start-ups working to change the way people travel. As part of this new initiative, Toyota has formed a partnership with and invested an undisclosed amount in ride-hailing company Uber. Neither Toyota nor Uber would disclose terms of the deal. A person familiar with the situation who asked not to be named said the investment is small, and Toyota has no interest in taking a big position in the ride-sharing company.

Uber reportedly gets other perks, aside from money, with the Toyota partnership. The company will expand its vehicle financing program with Toyota, allowing customers to lease Toyota vehicles through the program and pay down the cost by driving for Uber. Toyota and Uber hope to begin providing the new leasing options by the second half of this year. The companies plan to develop in-car apps that support Uber drivers, and would also cooperate on trials in countries where ride-hailing is growing.

Uber, based in San Francisco, is the biggest ride-hailing company in the world. The company was valued at $62.5 billion in December and has raised more than $10 billion in capital since it was founded in 2009. Uber has a strong position in congested urban centers where ride-sharing is beginning to take root.

In a technology-driven future, getting around may not require owning a car. In some American cities, small groups of people are already choosing not to own cars by relying on ride-hailing services like Uber. Automakers have become increasingly concerned about the services’ potential to help people travel easily and cheaply without owning a car. Now, traditional automaker are scrambling to reposition themselves to take advantage of the development of self-driving cars, electric vehicles and ride services.

Eventually, self-driving cars will be a reality. In the future, Uber could use fleets of driverless vehicles to operate around the clock and further cut the cost of ride services. However, right now there is no sign that car-sharing or ride-sharing are slowing auto sales. Auto sales in the United States reached a record high in 2015 and are on the path to rise again this year. China and other international markets will ensure the global auto market continues to grow.

Toyota is a big player in self-driving innovation. Last November, the company announced a $1 billion investment over the next five years for the creation of the Toyota Research Institute, a new company established to develop AI and robotics for self-driving capabilities. The headquarters will be located in Silicon Valley near Stanford University in Palo Alto, California. A second facility will be located near the Massachusetts Institute of Technology (MIT) in Cambridge, Massachusetts. The new company began operations in January 2016.

The Toyota Research Institute will focus on resolving society’s future challenges using artificial intelligence and big data, according to a statement from the company. Dr. Gill Pratt, a program manager for the DARPA Robotics Challenge who joined Toyota in September 2015, will serve as CEO of the new entity.

Dürr Aktiengesellschaft Given a €33.00 Price Target by The Goldman Sachs Group Analysts