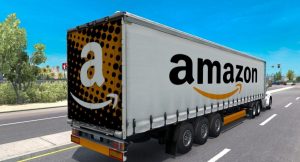 Reports have emerged that Amazon (NASDAQ:AMZN) is building an app that would connect truckers with shippers in need of truckers in an “Uber-like” way. Several job postings by the company appear to confirm this. A job posting for Amazon’s Minneapolis office requests a principal product manager to work on “an exciting and confidential initiative in middle-mile transportation organization.” According to a source with direct knowledge of the matter, Amazon will launch the app sometime next summer.

The new app will reportedly offer real-time pricing and driving directions. The app will also offer personalized features such as truck-stop recommendations and a suggested route of loads to pick up and drop off. It could also have tracking and payment options, which would help speed up the shipping process.

Amazon has been focusing its energy on developing technology to revolutionize the supply chain. The trucking industry is one of the few that has largely been untouched by technology. Most of the trucking companies are small businesses, with 90 percent of them owning fewer than six trucks.

Amazon keeps hinting that it wants to rely less on third-party companies and instead build its own shipping empire. With an ever-growing number of packages to deliver, Amazon could save a lot of money by controlling its shipping costs, which have been rising. The U.S. trucking industry is estimated to be about $800 billion. Roughly 84 percent of all freight spending is on trucking.

While the development may help remove inefficiencies in the process of moving goods around the country, it may also eliminate the need for brokers who typically perform this service. Third-party brokers typically charge a commission of about 15 percent for doing the middleman work of handling the paperwork and phone calls to arrange deliveries between shipping docks or warehouses.

Amazon is uniquely positioned to become the best delivery logistics system in the world. The online retail giant already has a gigantic shipping network. Over the past year, Amazon has purchased thousands of trailer trucks and dozens of cargo planes. The company has also launched services like Amazon Flex that take packages straight to the end customer.

There are numerous startups in this space, including Convoy and Trucker Path, and incumbent players, like C.H. Robinson and J.B. Hunt. Seattle-based startup Convoy raised $16 million in funding earlier this year for the same basic idea. Dan Lewis, the CEO of Convoy, is a former Amazon employee. Trucking marketplace Uber Freight also matches shippers up with a truck without a middleman and offers shippers pricing in real time, basing the cost to transport their goods on supply and demand.

Great-West Lifeco Inc. Given Average Recommendation of “Hold” by Brokerages