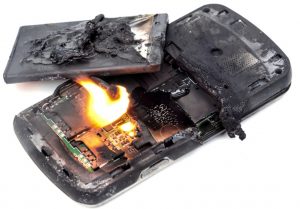 One of the few weaknesses of lithium-ion batteries is that they contain a highly flammable electrolyte. If a Li-ion battery overheats, the result is usually a very big fire, sometimes accompanied by an explosion. There have been numerous reports of phones and hoverboards catching fire due to short circuits in batteries.

The battery issues have caused alarm in the personal electronics industry, but engineers have not been able to solve the problem. The problems have been significantly hindering further practical applications of the next generation of high-energy batteries. Previous attempts at building flame retardants directly inside batteries significantly reduced their performance.

The researchers said that the new approach does not stop overheating from occurring, but simply prevents a fire. An integrated flame retardant is released when the battery reaches a critical temperature. The team of researchers published their findings in the journal Science Advances, which described their technique and results.

The Stanford University researchers created a new separator including a flame retardant to place between the positive and negative sides of the battery. The new separator uses triphenyl phosphate (TPP), a common flame retardant, within a polymer shell that prevents the TPP from seeping into the electrolyte.

Several of the separators are inserted into the electrolyte that sits between the anode and cathode. When the separator hits 160 degrees Celsius, the polymer melts and releases the TPP, extinguishing the combustion. In test devices, the researchers report that the retardant was released and merged with the electrolyte in just 0.4 seconds. While the device would survive the overheating event, a user would presumably have to purchase a new battery in order to continue using it.

Yi Cui, this project’s lead scientist, says that the chemical won’t be released under normal temperatures. The scientist is quoted as saying, “”Using our ‘smart’ separators, battery electrochemical performance will not be affected by the flame retardant under normal conditions. However, once there is a potential thermal runaway, the flame retardant will be activated and nip the fire or explosion in the bud.”

The researchers note that further testing needs to be done. While small trials have been successful, it remains to be seen whether the flame retardant will still be effective when larger cells are used.