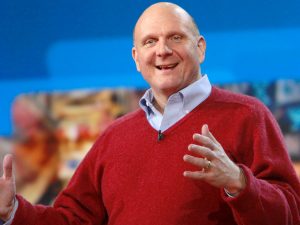 A new effort by former Microsoft chief executive Steve Ballmer will bring a business-minded eye to the U.S. government. Ballmer has funded a project, dubbed USAFacts, to compile where every cent of government money is raised and spent at the federal, state and local levels. The effort will shed more light on the government’s budgets and their effects on voters’ lives.

The new initiative was compiled with the help of academics at places like Stanford University. Ballmer and his crew have broken down roughly $5.4 trillion in U.S. spending. The team opted to build the site on top of Microsoft’s Azure cloud and SQL Server database. USAFacts gets its information from more than 70 publicly available federal, state and local government sources.

Journalists and nonprofits already gather such facts about federal spending. Ballmer, though, argues the data out there is mostly insufficient and sometimes tainted by bias. The numbers-obsessed guru believes that voters and regulators alike could make better decisions if they had unbiased data at their fingertips. Ballmer hopes that public debate will be strengthened by the availability of a common set of accurate data.

Ballmer first revealed the project speaking to Bloomberg in November. The USAFacts site went live on April 18 (federal tax day in the US). The site has a description of the project’s mission that says:
“USAFacts is a new data-driven portrait of the American population, our government’s finances, and government’s impact on society. We are a non-partisan, not-for-profit civic initiative and have no political agenda or commercial motive. We provide this information as a free public service and are committed to maintaining and expanding it in the future.”

USAFacts contains a searchable website and multiple PowerPoint presentations, and also has something like a 10-K document that the Securities and Exchange Commission makes companies create. The database shows metrics like how much is raised in corporate versus sales or income taxes; how much goes to diplomatic services versus the military; and how much money goes to a particular school district.

The site also has a section of its report devoted to the “risk factors” that could threaten the growth potential of the U.S., like the rising costs of programs like Social Security and inadequate upgrades to the country’s transportation system. Ballmer said, “A lot of things in the U.S. government are working well by the numbers … on the other hand, there are things that are certainly not getting better.”